‘It was great’: In leaked audio, Trump hailed low Black turnout in 2016 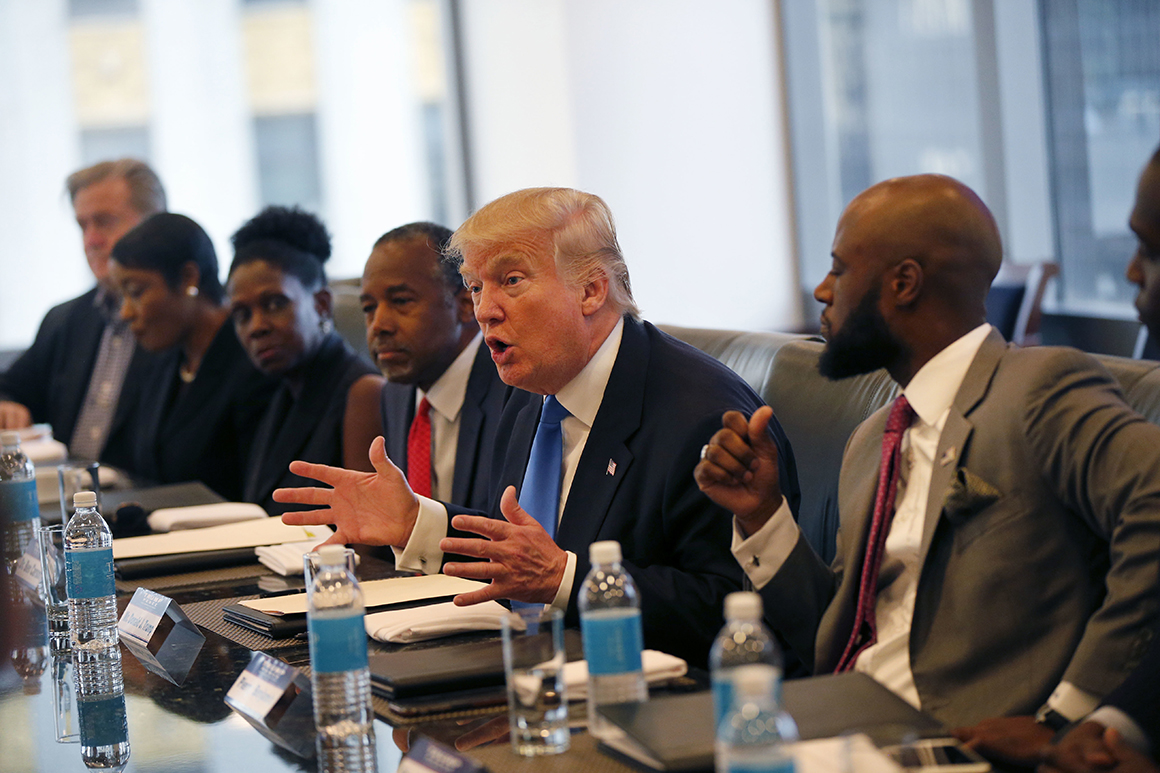 Trump has repeatedly alleged, without evidence, that expanding mail-in voting will lead to massive fraud, and Republicans have filed lawsuits against a number of states attempting to do so. Higher voter turnout tends to benefit Democrats — low turnout among Black voters in key states is one of the reasons Hillary Clinton lost to Trump in 2016. And voting rights activists have warned that GOP efforts to limit access to absentee ballots could keep many from voting this fall, particularly Black people, seniors and others at high risk from Covid-19.

The coronavirus pandemic was not on anyone’s radar on Jan. 16, 2017, Martin Luther King Jr. Day, when Trump hosted the meeting with leaders from the Drum Major Institute, a voting rights group founded by King and fellow civil rights leader Harry Wachtel. But voting access was. The meeting was requested to lobby Trump on a proposal to put photo identification on Social Security cards to combat voter ID laws.

Wachtel’s then-chief of staff Tootsie Warhol provided the audio to POLITICO this week. The lawyer-turned-activist attended the sit-down and surreptitiously recorded it from his iPhone. Born Teddy Mukamal, he said his motivation for sharing the recording now is that he is in the process of reinventing himself as Warhol, an artist and activist, since leaving his law firm in November.

Warhol has filed with the Federal Election Commission to run for president in 2020, though he described his independent campaign as a new way to engage voters and said he hopes former Vice President Joe Biden wins the November election.

He told POLITICO, “The first thing that I can never forget was how when you walked in, (Trump) name-drops all these Black celebrities and tries to give the illusion that they’re his friends.”

Inside Trump Tower, Trump told the group that he had “so many” Black friends who “are so incredible, and everyone knows that.” At the top of the meeting, he showed off NBA Hall of Famer Shaquille O’Neal’s sneaker, world heavyweight champion Mike Tyson’s belt and Sugar Ray Leonard’s boxing glove. (He also flaunted Tom Brady’s Super Bowl helmet and his own chair from “The Apprentice.”)

And during the 45-minute meeting, Trump asked the attendees if they were “surprised that Hillary lost so badly” and boasted that he won 11 percent of the Black vote in 2016. Trump lost the national popular vote by nearly 3 million and only won 8 percent of Black voters, according to exit polls, 81 percentage points behind Clinton. Mitt Romney, the 2012 Republican presidential nominee, and John McCain, the 2008 GOP standard-bearer, won 6 percent and 4 percent of Black voters, respectively.

Manigault told Trump the group had talked about what the incoming administration could do to reduce crime in Chicago while he was out of the room. Soon after, Trump asked: “Do you know John Lewis? What do you think?”

Days earlier, in an interview with NBC’s Chuck Todd on “Meet the Press,” Lewis said he didn’t see Trump “as a legitimate president” because Russia helped him get elected.

“It really backfired on him because he’s really, you know, it’s what he said is very bad in terms of a democracy,” Trump said. “You run. You win. They even gave me that, right? They gave the Man of the Year stuff in Time. And then he says, ‘Oh, it’s not legitimate.’ That’s really against a democracy, like or not like.”

Despite that, the president-elect was complimentary of the civil rights icon. “I didn’t know him personally, but I always liked him,” Trump said then of the Georgia Democrat. “I thought he was a good guy, a good icon.”

But when Lewis died last month, after a battle with pancreatic cancer, Trump declined to visit the Capitol to pay his respects, and he was the only living U.S. president not represented at Lewis’ funeral in Atlanta, where former Presidents Barack Obama, George W. Bush and Bill Clinton delivered eulogies. Former President Jimmy Carter didn’t attend but sent his condolences in a brief letter that was read aloud during the service.

In an interview with Axios’ Jonathan Swan published this month, Trump repeatedly highlighted that Lewis chose not to attend his inauguration in 2017. The president said he didn’t know how history would remember Lewis and that he couldn’t “say one way or the other” whether he personally found Lewis impressive.

“I find a lot of people impressive,” Trump said. “I find many people not impressive.”

In the 2017 meeting with civil rights leaders, Trump criticized the state of America’s inner cities, which he said are in bad shape — a recurring theme of his presidency. And he went on to claim that he listens “better to the African American people than anybody else,” including those in the room, and pledge to “work on the inner cities.”

Trump floated the possibility of another meeting at the White House in one or two months, but Warhol said it never materialized. The White House invited Young to accept a Presidential Medal of Freedom, Warhol said, but Young had already been awarded the nation’s highest civilian honor by Carter in 1981.

“The President is grateful for his support among Black Americans, and their many contributions to helping make America great,” deputy White House press secretary Judd Deere said in a statement Friday. “Donald Trump’s record as a private citizen and as president has been one of fighting for inclusion and advocating for the equal treatment of all. Anyone who suggests otherwise is only seeking to sew (sic) division and ignore the President’s work for underserved communities.”