Italian PM LOSES IT with EU promising to halt virus... 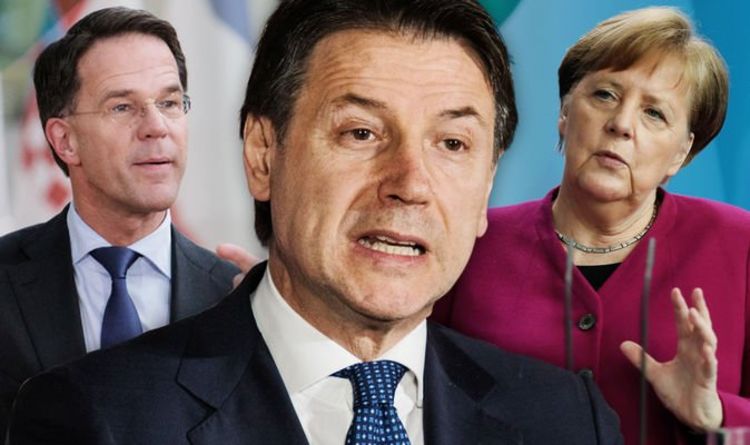 Mr Conte also warned he would refuse to sign off on the deal at the European Council until there were what he described as “adequate measures” on the table – likely a reference to so-called coronavirus bonds which would make all members of the EU27 jointly responsible for debts racked up in public spending. The 55-year-old reacted angrily after northern European nations, particularly the Netherlands, voiced their steadfast opposition to the idea of eurobonds, nicknamed coronabonds, which have been pushed by Italy as a solution. Describing the 500 billion euro deal which the ministers unveiled last night, Mr Conte said it was “still insufficient”.

Mr Conte said Italy would “battle to the end” to secure agreement on the issuance of common debt, something that is opposed by northern European countries including Germany and the Netherlands.

The Prime Minister, who is under attack from the opposition over the package agreed on Thursday, stressed it was no more than a proposal and he would not sign off on it in its current form.

He stressed joint debt – in other words coronabonds – was Italy’s preferred solution.

He added: “At the European Council I will not sign anything until I have a set of measures that are adequate to tackle the challenge we face.”

The visibly irritated Premier also took aimed at what he called the “falsehoods and lies” of the opposition led by the right-wing League leader Matteo Salvini, which he said “hurt us because they weaken our hand in the negotiations,” with the EU.

Making available cheap loans from the eurozone bailout fund, as agreed by the finance ministers, was a “totally inadequate tool” and Italy had no intention of applying for help from the fund, known as the European Stability Mechanism (ESM).

JUST IN: How ‘untenable’ Coronavirus has exposed fragility at heart of the EU

He said: “This is a difficult but necessary decision for which I take all political responsibility.”

Draconian curbs on movement and the shutdown imposed on most shops and businesses across Italy were imposed on March 9, and were scheduled to expire on Monday.

Among a few exceptions to the lockdown extension, Mr Conte said bookshops, stationers and shops selling children’s clothes could reopen from April 14.