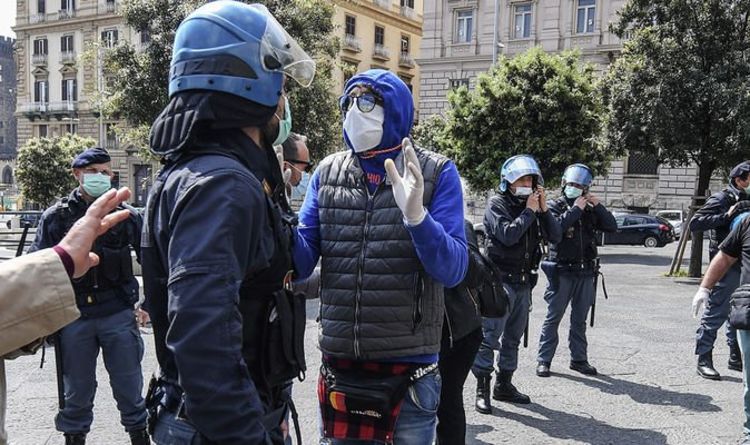 Italy – one of the hardest-hit countries from the coronavirus pandemic – will start to ease its two-month strict lockdown from Monday. However, tensions across the country are still intensifying with many residents in fear that the virus chaos may still spark mass starvation. In recent days, fury has erupted with fights breaking out between shoppers at a series of supermarkets.

One incident that went viral on social media showed a desperate family pleading with a police officer after they were unable to withdraw their grandmother’s pension – the family’s sole income.

In another video, supermarket shoppers erupted into a brawl after several people attacked one shopper for refusing to wear a face mask.

One Priest told the Guardian: “Now people are more afraid — not so much of the virus, but of poverty. Many are out of work and hungry. There are now long queues at food banks.”

Another piece of footage showed a fight breaking out in a supermarket after a customer refused to pay for his shopping, insisting he “had not money but still had to eat”.

People across the nation have been trying to help in the hunger crisis by filling baskets with food and leaving them in the streets for poverty-stricken residents to take what they need, reported Business Insider.

Meanwhile, police officers have been forced to guard supermarkets in Palermo, the capital city of Sicily, after a private Facebook group currently under investigation urged people to organise large raids on grocery stores and markets.

JUST IN: Britons may have to wear face masks when they return to work

Mr Conte said he was open to a further easing of lockdown measures, once construction and manufacturing activities resume next week.

Retailers and museums are currently set to reopen on May 18 and bars and restaurants later in June.

The Italian Government is desperately trying to limit the economic impact of the pandemic, which could cause unprecedented economic collapse.

Mr Conte, who approved an initial 25 billion-euro package of measures in March, plans to fund another stimulus package for the economy worth 55 billion euros.

This comes as the number of new coronavirus cases in Italy remained stable while deaths rose.

Civil protection authorities announced on Saturday that there were 1,900 new cases, compared with 1,965 a day earlier.

There were 474 deaths from the virus, compared with 269 on Friday, bringing the total number of fatalities to 28,710.

The lockdown, border closures, and travel restrictions have taken their toll on Italy’s economy, which was worsened by an initial lack of soldarity from the EU.