The volcano, which is located on the Italian island of Sicily, burst into life on Sunday, April 19, releasing ash and got gas. Volcano Discovery described the blast as a “brief, but intense episode of explosive activity”, with he eruption taking place at 7.30AM local time.

Just 45 minutes later,t he eruption had settled down, simmering to a flow of lava down the volcano’s steep side.

The emission of ash and gases began mildly at first, but had intensified by around 9AM and reports said the column of ash ascended five kilometres (3.1 miles) into the air.

The column of ash was blown south-east of the volcano and affected Bove Valley and the nearby commune of Zafferana where residents are still on COVID-19 lockdown.

A video of the explosion shows a huge blast taking place at the tall volcano, with blood red lava being blasted into the air.

Smoke and ash continued to billow from the volcano, although there have been no reports of damages or injuries to people.

The situation is being continuously monitored several days later.

The monitoring station, the National Institute of Geophysics and Volcanology of Catania (INGV), said: “The network’s follow-up has recorded Strombolian activity [explosive eruptions separated by calm periods of varying length], which have subsequently taken on the characteristics of a small source of lava.” 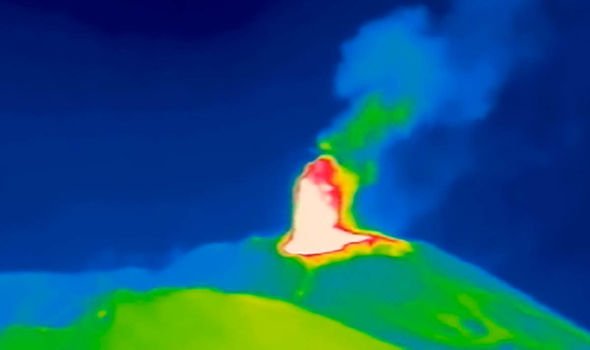 The volcano released ash 5km into the air (Image: NEWSFLASH)

“Starting in the early morning hours, from around 07:30 local time, the New Southeast Crater began to produce strombolian-type explosions along with a sharp increase in volcanic tremor.

“Activity rapidly increased in intensity, producing a weak lava fountain and an ash column that rose approx. 1 km. Incandescent lava covered most of the New SE crater, but no lava flow was produced.”

At 3,329 metres tall, Mount Etna is the largest active volcano in Europe.

Etna is recognised as one of the most active volcanoes in the world with an almost constant rate of activity.

Etna has been restless and aggressive for millennia, with its first confirmed eruption occurring around 6000 BC, according to the Smithsonian.

The volcano is constantly shifting and bubbling, with around three million people living under its shadow, within a 62-mile radius.

Etna, sitting on the east coast of Sicily, is the highest peak in Italy south of the Alps.