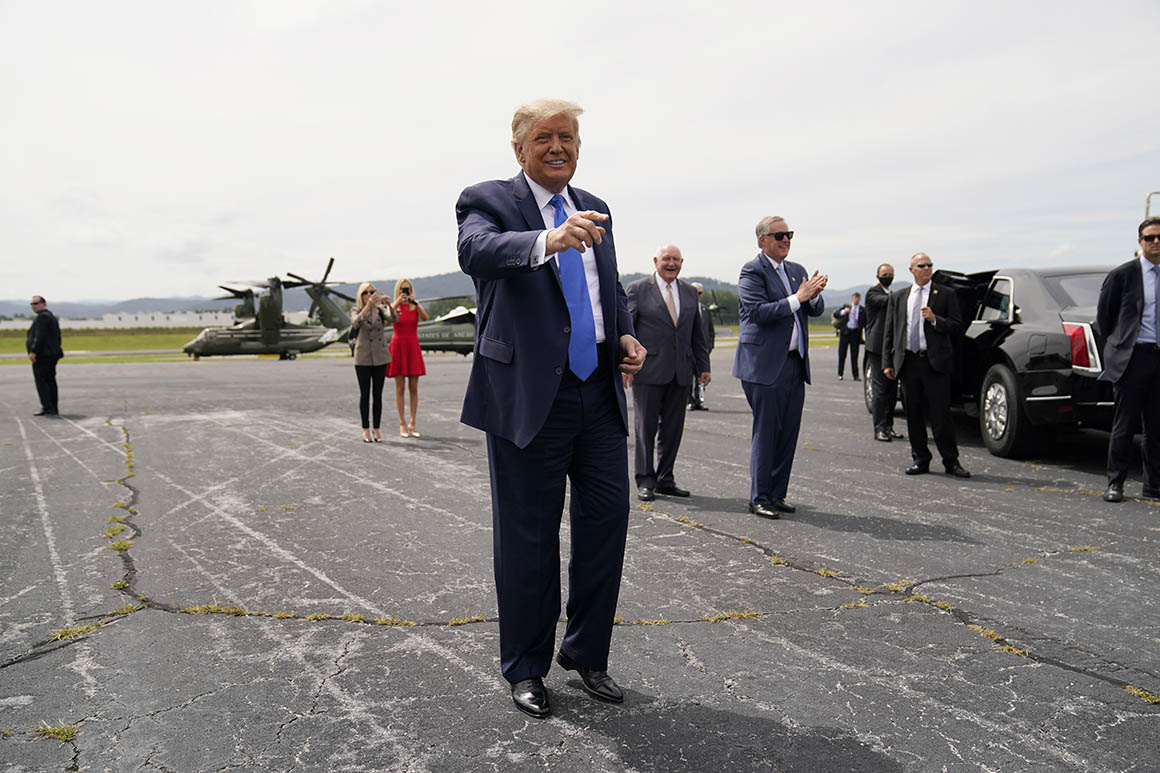 It’s a significant bet at a time when polls have shown slippage in the president’s economic edge over Biden, who said over the weekend he would reshutter businesses if health experts recommended such a move as necessary to prevent further infections. A Reuters/Ipsos poll released last week showed Trump and Biden tied at 47 percent approval for their handling of the economy, while TheEconomist/YouGov gave the president a 6-point edge over Biden in a survey this month.

Trump signed four executive orders related to unemployment relief, payroll taxes, federal student loan debt and eviction moratoriums earlier this month to fill the gap left by stalled congressional negotiations over a fourth round of Covid-19 assistance, though many of the measures — such as the unemployment aid — are proving difficult to implement. And the Biden campaign accused Trump of raiding Social Security to fund the deferral of payroll taxes.

Brian Walsh, president of the Trump-aligned super PAC, said the group’s internal polling has shown an uptick in voter concerns about the economy as the election has drawn nearer and Americans have tuned in to both party’s conventions.

“One of the things we’re seeing in the polls right now is people are becoming more focused on the economy. It’s been Covid, Covid, Covid, but now people are starting to say, ‘OK what’s the plan for the next four years?’” Walsh said.

“You’re starting to see more and more articles about how the [coronavirus case] numbers are starting to recede. That doesn’t mean it’s gone, but there’s a difference between managing the pandemic and what elections are about, which is the future. And we have been seeing economic concern among the key groups that we target,” Walsh added.

The economy-centric approach in the group’s first major ad buy this fall mirrors the attitude Trump and his aides have adopted toward the Covid-19 pandemic and resulting economic fallout. Until the president resumed regular updates on the virus and vaccines at the White House last month, he and his top aides spent June and July pouring their energy into the economic reopening and a push to resume in-person learning for schoolchildren this fall.

With U.S. unemployment still sitting at its highest level in decades, the September ad buy is a telltale sign of which swing states are giving Trump allies anxiety after Biden rocketed to the top of national polls earlier this summer and surpassed the president in states Trump won narrowly in 2016.

Of its $ 18.6 million in advertising next month, America First will spend nearly $ 10 million in North Carolina alone, focusing on Charlotte, Raleigh and smaller markets where the Trump campaign is not currently on the airwaves. A Morning Consult poll released Monday showed the president polling within the margin of error against Biden in North Carolina, but trailing him by 8 percentage points among independent voters.

“I feel good about Florida and good about North Carolina,” Walsh insisted, adding that the president’s outside boosters “need to keep our foot on the gas in Pennsylvania and Wisconsin.” The super PAC will spend $ 3.7 million in Wisconsin and $ 3 million in Pennsylvania next month, filling gaps left by the Trump campaign in smaller media markets and supplementing their efforts in larger areas like Green Bay.

Though the ads will differ by state, each will aim to undercut Biden’s proposed economic plan or raise questions about his track record on the economy as vice president during the Obama administration. Officials involved with the planning said they watched last week’s Democratic National Convention closely for potential soundbites and material that can be incorporated into their ads, in addition to fetching ideas from focus groups and internal polling.

“We’re hitting Biden on fracking in Western Pennsylvania, but we’re hitting him on tax increases in Wisconsin,” one of the PAC officials said, adding that the group’s purpose is “to define the opposition” so the Trump campaign can focus on shaping the president’s image.