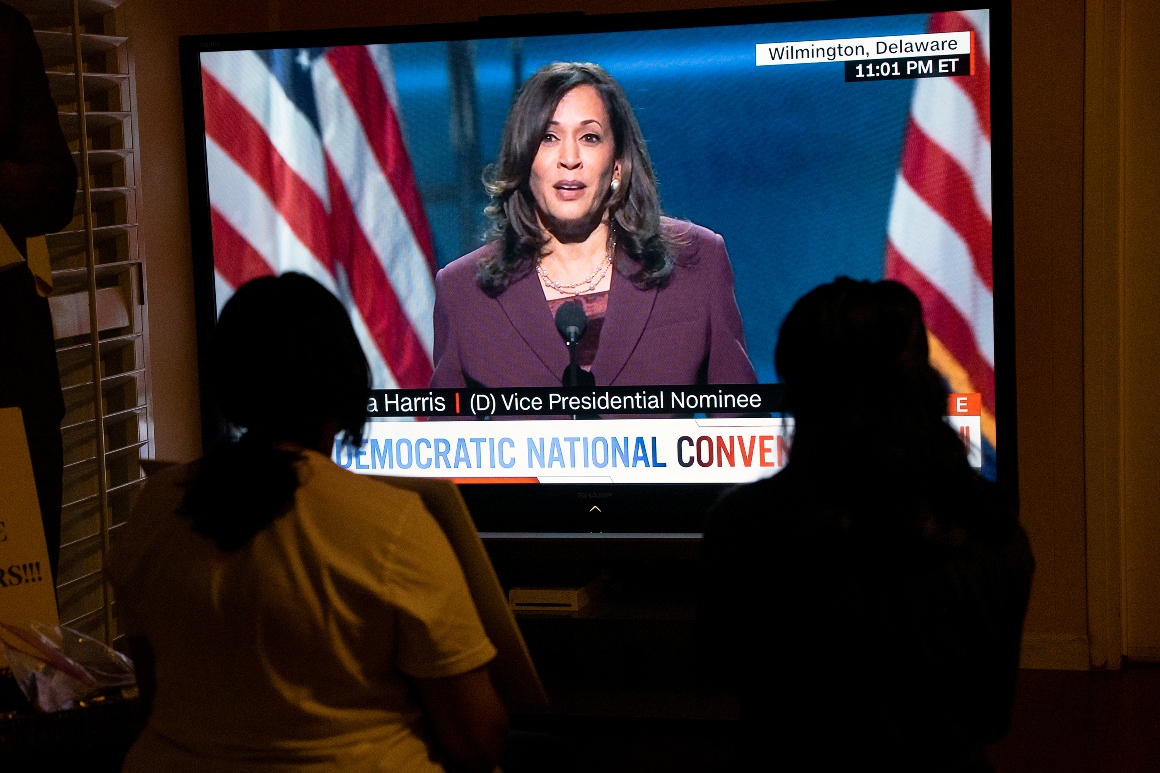 Wednesday offered an ideal setting for Harris. Some of her best moments have come in set-piece appearances — such as speeches and Senate hearings especially. In the crowd-less, dead-silent auditorium decorated like a mini-convention hall, she made history talking to a ruptured country in search of healing. Harris reintroduced herself. She tried to allow Democrats — especially women and people of color — to see themselves in her words. She vouched for Biden. She punched Donald Trump, but not nearly as hard as Barack Obama had moments before.

She met the moment, but did not try to be all things to all Democrats.

There was no olive branch to progressives, who hoped to be voting for a different presidential candidate, then wished for another woman to be Biden’s VP pick. She made racial injustice a defining focus of her speech. And Harris also did not nod to the dual realities of representing Biden while carving out areas for herself in future policy debates.

It was always Harris’ plan as she campaigned for president to assemble both the people of color and young voters who turned out for Obama in 2012 and 2008, and the suburban women who went for Clinton in 2016. Like the 20-plus others who ran and sputtered, Harris failed to dislodge Biden. But for the next 76 days, those demographics are central to her efforts, only this time as an understudy, not the principal.

It’s Harris’ party now, even if it might be a few years before she becomes its official leader — then has to fight to keep that role.

Blessings from immediate Democratic forebearers came throughout the evening. In Harris, Biden picked “an ideal partner who’s more than prepared for the job,” said Obama, who was initially scheduled to speak after Harris but asked to move ahead of her to signify a passing of the torch. Obama described her as “someone who knows what it’s like to overcome barriers.”

Earlier in the night, Obama thrived in the virtual setting, already having the benefit of forging an intimate connection with Democrats after a dozen years. With the Museum of the American Revolution in Philadelphia as his backdrop, he delivered an emotional and urgent warning that the nation’s democracy was at stake if voters didn’t reject Trump, who he argued is incapable of growing in the job.

Harris and Obama share more than the connective tissue of Biden.

In the early days of her political career, she took sides in the Obama-Clinton rivalry. Harris made powerful friends in the process, but also enemies in Clintonworld, who saw it as a personal slight and would punish her when they could. Donors turned on her. Some never forgave her and even tried to scuttle her chances in the veepstakes.

Harris raised money for Obama’s Illinois Senate race before flying to Iowa and donning a parka to trudge through snowy precincts for him. Years later, Obama tapped her to speak at the Democratic National Convention in 2012. She recalled her pride when her late mother bought their first home, before accusing Mitt Romney of embracing policies that helped create the foreclosure crisis that she’d cleaned up after.

Friends viewed it as a rebuke by the Clintons when Harris wasn’t given a chance to star at the 2016 convention. But the snub, Harris aides insisted at the time, had more to do with a quirk in California’s election rules. That fall, she ran against an underfunded Democratic congresswoman in the November runoff, and they argued that the national party (and Clinton campaign) didn’t want to feature one Democrat at the expense of another.

Clinton’s decision to sideline Harris overlooked what was already obvious in California, where Harris overwhelmingly won the state party endorsement. It was on the eve of the 2016 convention that Obama and Biden formally endorsed Harris’ U.S. Senate run. Biden, who months earlier accepted her invitation to speak at the state party convention, invoked his late son, Beau, who Harris had worked extensively with on the mortgage settlement as a fellow attorney general.

“Beau always supported her,” Joe Biden said at the time, “and I’m proud to support her.”

Biden, 77, is now pitching himself as a bridge to the party’s next generation. But Democrats wondered for months what that actually meant. Last week, he answered by choosing Harris, 55. And Obama and Clinton followed suit on Wednesday night.

In suffragette white, Clinton touched on what she called Harris’ pursuit of justice and offered a first-hand warning about what she’ll encounter. Like Clinton, Harris has faced constant sexism. And like Obama, Harris’ appearance on the national scene has brought baseless claims of birtherism rooted in racism. The VP announcement brought a flood of denigrating memes, despite an effort by the Biden campaign and allied Democrats to “have her back.”

“I know something about the slings and arrows she’ll face, and believe me, this former district attorney and attorney general can handle them all,” Clinton said, citing Harris’ resume.

Harris’ sister, Maya, who helped nominate her, was a senior policy adviser for Clinton’s 2016 campaign. Clinton offered a tribute to the late Tyrone Gayle, a young aide who was beloved by his former bosses — Clinton and Harris — as well as scores of operatives and reporters who knew his character and competence.

Clinton also mused about the children who see themselves in America’s future because of Harris, whose nomination is introducing a new immigrant narrative around national politics. “This is our country’s story: breaking down barriers and expanding the circle of possibility,” Clinton said.

This was the second Harris speech in a week that had to be quickly assembled, with contributions by the Biden and Harris teams and initial drafts pulled together by outside speechwriters at Fenway Strategies, a firm founded and staffed by Obama alums. Several of the themes made their way from her speeches during the primary.

Much of Harris’ remarks were built around her mother, as her team attempts to introduce more of Harris’ personal story into the campaign.

For years, Harris’ top advisers and key allies have urged her to go deeper in telling her story and connecting it to the broader political moment. Some wanted the daughter of Indian and Jamaican immigrants to engage in the kind of public soul-searching identity quest that Obama did in earlier times.

Instead, on Wednesday, Harris continued to focus on what her ascendency means to others — and how they could see themselves in her rise. She marked her place in history, but she was no more introspective about herself than she has been.

She has always pushed back on being categorized. “I am who I am,” she told a reporter last year. “I’m good with it.”

The immediate aftermath of Harris’ speech was marked by an awkward stretch as she stood alone onstage and waved to clapping admirers on a screen. But the principals were clearly pleased with how the night went: The Bidens, along with Harris and her husband, Doug Emhoff, erupted in cheers backstage afterward.