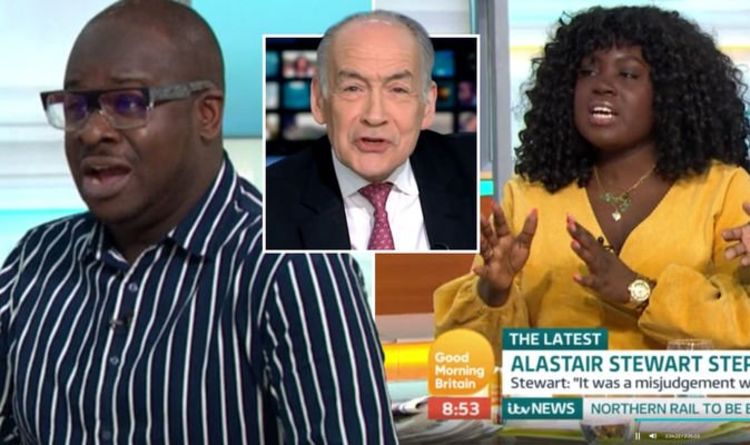 GMB host Susanna Reid kicked off the debate by reading the quote Alastair used on Twitter to spark the row.

Susanna said: “We should say that this was a quote from Measure for Measure: ‘The man, proud man, dressed in a little brief authority most ignorant of what he’s most assured.

“His glassy essence like an angry ape plays such fantastic tricks before high heaven as makes the angels weep who, with our spleens, would all themselves laugh mortal.’”

The TV presenter then read aloud the response from the Twitter user which read: “Just an ITV Newsreader referring to me as an ape with the cover of Shakespeare.”

The GMB host then asked Ed and Afua if the tweet was racist to which Afua replied: “Absolutely.”

Afua also added that Alastair “should’ve known” the tweet would be deemed offensive by a “black Twitter user.”

However, Ed took issue with his fellow panellist’s stance, describing the tweet as “just a quote.”

Susanna also pointed out the quote used by Alastair had been used by the broadcaster before but to a white Twitter user.

Afua remained adamant with her position on the debate, reiterating: “If you’re going to use a quote that has the words ‘angry ape’ in it and aim it at a black Twitter user, that is racist. It is.”

As the debate came to a close, Susanna asked Afua what amends she would expect to be made by Alastair upon acknowledging the quote as a “misjudgement.”

Afua responded: “Well definitely an apology and definitely taking yourself out of a position where you’re able to say these things, I think is a really good start.