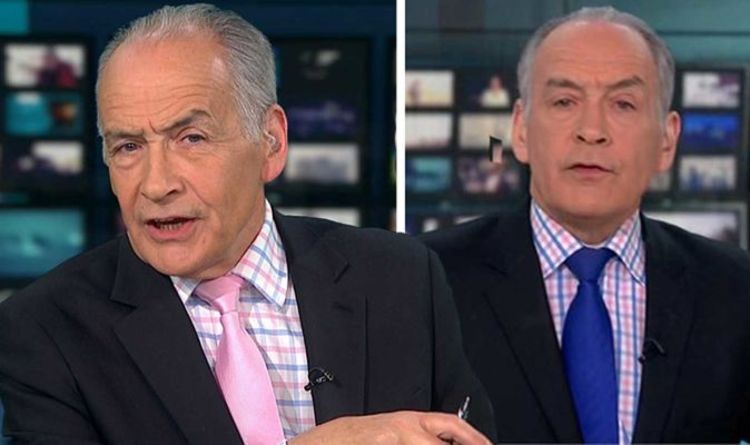 ITV News confirmed the news saying it was down to “errors of misjudgement in Alastair’s use of social media”. Stewart, who was awarded an OBE for services to broadcasting in 2006, said it had been a “privilege” to work at the channel.

In a statement, he said: “It was a misjudgement which I regret but it’s been a privilege to bring the news to households throughout the UK for the past 40 years.”

Alastair has been the longest-serving male newsreader after he joined  Southern Television back in 1976, then ITN in 1980.

Michael Jermey, Director of News and Current Affairs at ITV has said: “Alastair has been a long-standing, familiar figure to viewers of ITV News, both reporting and presenting with distinction. We wish him the very best for the future.”

ITN’s Chief Executive Anna Mallett added: “We would like to recognise Alastair’s contribution as one of the UK’s foremost journalists and TV presenters and to thank him for his commitment to delivering high-quality broadcast news over many years.”

READ MORE: Alastair Stewart speaks out as he steps down from ITV after 40 years

It comes after tweets sent from Stewarts official and – now deleted – Twitter account have resurfaced, where a black Twitter user claimed Stewart “called him an angry ape” three weeks ago.

Express.co.uk contacted Stewart’s agent for a comment, and ITV news has not confirmed whether the incident is behind him leaving his role, or whether Stewart was sacked or resigned.

Since the announcement, colleagues, journalists and other news anchors have reacted.

Presenter of the ITV Evening News Mary Nightingale tweeted: “Very sad about the departure of #AlastairStewart. He was a good friend and mentor to me when I started at Carlton TV, and we worked together for more than 27 years. I will miss him.”

Katie Derham, a presenter at BBC Radio 3 added: “So very sorry to hear the news about #AlastairStewart stepping down from ITN. A very dear friend and colleague; enormous fun and extremely supportive, and unbelievably well informed. He will be missed.”

Sky News presenter Anna Botting said: “Alastair hope you can still read these messages – you’ve always been so supportive and encouraging…for which I am very grateful. I share the sadness at your departure and wish you all the very best. #AlastairStewart.”

He recorded one of the last interviews with Lord Mountbatten before he was assassinated by the IRA in 1979, alongside that, Stewart spent six weeks in Ford Open Prison to make a half-hour documentary.

During the 1980’s he presenter and reporters Channel 4 News as well as providing live coverage of the Space Shuttle Challenger disaster as the details of the tragedy unfolded, and a two-minute newsflash became an unscripted, one-hour special programme.

He also anchored – alongside Sandy Gall, the award-winning coverage on ITN on the night of the bombing of the Pan Am jet over Lockerbie and presented the ITV network coverage of the memorial service for the victims which followed.

In 1989, Stewart moved to ITN’s flagship News at Ten bulletin and anchored live from the fall of the Berlin Wall, before spending a year in the US as ITN’s Washington correspondent. Four days after returning from his assignment in Washington he was sent to Dhahran, Saudi Arabia, to anchor ITN’s coverage of the Gulf War, where he presented News at Ten, live from Saudi Arabia for two consecutive months.

To add to his achievements, Stewart became the first British television reporter to broadcast live from the liberated Kuwait City.

As for his work in the 90s, Stewart provided commentary for many special programmes including State Openings of Parliaments, numerous by-elections, state visits and the Royal Weddings of Charles, Prince of Wales and Lady Diana Spencer, and The Duke of York and Sarah Ferguson.

In February 2007, he became co-presenter of the ITV Lunchtime News, replacing Nicholas Owen.The bulletin was revamped in July 2009, from which point Stewart became one of two main alternate newscasters for the programme.