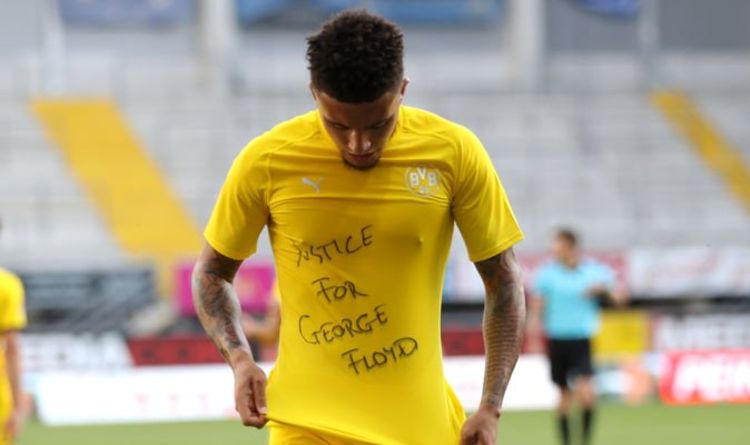 Borussia Dortmund winger Jadon Sancho unveiled a powerful message of support to the ‘Justice for George Floyd’ movement after scoring against Paderborn on Sunday.

The England international, 20, scored a hat-trick in a 6-1 away victory in the Bundesliga and after his first goal before the hour mark, unveiled an undershirt with a message reading: ‘Justice for George Floyd.’

He was shown a yellow card for taking off his match shirt as he showed the message to TV cameras.

The pair become the latest of a string of sportspeople to show their support for the protests against the death of Minneapolis resident Floyd earlier this week.

He wrote on Twitter later on Sunday night: “First professional hat trick. A bittersweet moment personally as there are more important things going on in the world today that we must address and help make a change.

“We have to come together as one & fight for justice. We are stronger together! #JusticeForGeorgeFloyd.”

Floyd, a black man from Texas, died while in police custody in Minnesota on Monday and the incident was caught on camera by witnesses.

The 46-year-old died after a white police officer, Derek Chauvin, kneeled on his neck for eight minutes and 46 seconds, including for almost three minutes after Floyd stopped moving and talking.

Father-of-two Floyd was accused of trying to pay with a counterfeit $ 20 bill at a local deli when he was arrested and pinned to the ground.

Despite Floyd begging for air, Chauvin did not move and the man fell unconscious and died in the street.

There have been demonstrations against racial injustice across the United States, and even across the world, as part of the Black Lives Matter movement to protest the police killings of black people across the USA.

And in addition to Sancho, Borussia Monchengladbach forward Marcus Thuram also showed his support after scoring against Union Berlin earlier on Sunday.

The 22-year-old, son of France icon Lillian Thuram, took a knee and bowed his head in another powerful gesture.

The previous day, Schalke and United States midfielder Weston McKennie wore an armband with the slogan: ‘Justice for George’.

He later said on Twitter: “To be able to use my platform to bring attention to a problem that has been going on to long feels good!!!

“We have to stand up for what we believe in and I believe that it is time that we are heard! #justiceforgeorgefloyd #saynotoracism.”