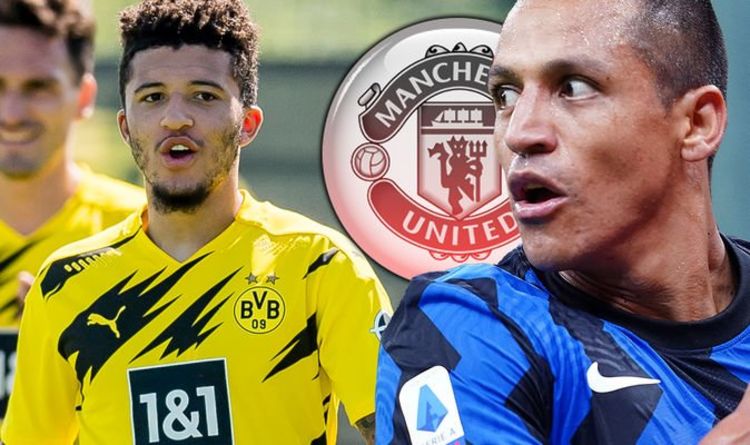 Alexis Sanchez’s failed Manchester United stint is over with the club and the player having mutually agreed to terminate his contract – freeing him up to join Inter Milan and making more funds available for Jadon Sancho. Inter CEO Beppe Marotta has revealed the Italian giants intend to make the Chilean’s switch to the San Siro permanent.

And an agreement for Sanchez to leave United and a deal for him to join Inter on a full-time basis are both likely to be officially confirmed on Thursday.

His loan stint in Milan was due to expire this week but he is now a free agent and will return to Italy, where he previously played for Udinese between 2006 and 2011, permanently without Inter having to pay a fee.

Sanchez is set to accept a substantial wage cut on the £500,000-a-week salary he earns at Old Trafford to join Antonio Conte’s team, who finished one point behind Serie A title-winners Juventus.

It is thought that his three-year deal at Inter could pay him less than half of what he was earning at United.

The decision to rip up his contract, which still had two years left to run, brings to an end the 31-year-old’s disastrous two-and-a-half year stint in Manchester after joining in a swap deal from Arsenal in January 2018.

The former Barcelona attacker’s performance levels dipped significantly after swapping the Gunners for United, where he produced just five goals and nine assists in 45 games.

By contrast, he managed four goals and 10 assists in just 29 appearances for Inter despite also battling injuries in his temporary spell with the Nerazzurri – and was particularly excellent after the season’s restart.

“The player is entirely owned by Inter. We have a contract with him for three seasons.

“We believe in him, that he can be a strong part of this squad and are happy to have concluded this deal.”

And the Manchester Evening News say that United’s willingness to pay Sanchez off to leave is due to their desire to land Borussia Dortmund’s Sancho.

With Sanchez’s salary off the wage bill, the 20-year-old winger is a more attainable target – despite the noises coming out of United that they will not be held to ransom by Dortmund.

The Red Devils currently do not want to meet Dortmund’s valuation, which is in the region of £108million (€120m).

And the MEN say that United are wary of Sancho’s wage demands with the pay that Sanchez earned at the club having caused friction within the first-team squad.

Paul Pogba and Anthony Martial were both said to be frustrated by their pay compared to Sanchez’s, likely due to the fact the Chile international rarely justified such wages.

But having taken their time to land Harry Maguire and Bruno Fernandes in protracted sagas over the last 18 months, United are still widely viewed as likely to land Sancho and it is thought they are simply trying to negotiate as good a deal as they can.

That’s despite suggestions they will walk away if Dortmund do not lower their asking price for the England international, who produced 20 goals and 20 assists in 44 games last term.

Signing the former Manchester City trainee, who joined Dortmund for £8m in 2017, would add more quality to a United attack that was superb after the Premier League’s restart.

He is likely to replace Mason Greenwood on the right flank, with Marcus Rashford lining up on the left and Fernandes in the playmaking role behind centre forward Martial.

Sanchez’s departure also frees up the No 7 shirt for Sancho, who could also take the option to pick up the iconic No 11 jersey – which remains vacant.

United boss Solskjaer said of his plans for the summer after his side sealed Champions League qualification last month: “That’s another part of Champions League, of course, financial gain but that’s not in my head.

“The club know what I feel we need and we are going to try and pursue it. Let’s see where we end up.

“For this team, it [Champions League] means better opposition next year and bigger games.

“We need to step it up definitely, because every week when we have Champions League, you have to have your best team.

“It’s not like this season with the Europa League when we can rest players and give minutes for the young lads.

“That’s another stepping stone for these, you’ve got to be fitter, stronger and more robust.”