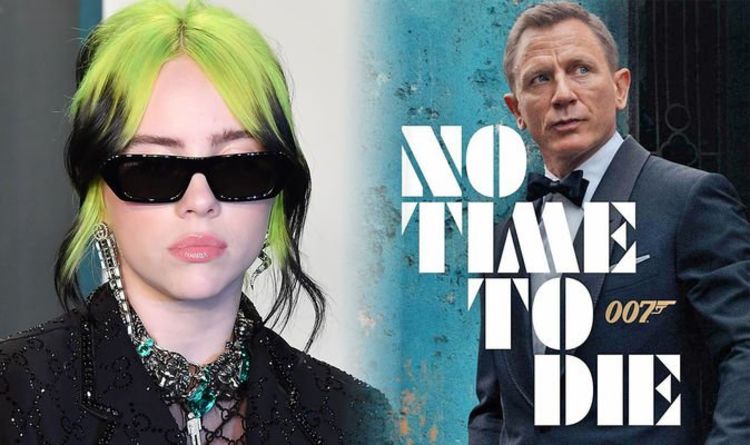 James Bond song performer Billie Eilish revealed the exciting news on Twitter this evening, telling her 3.6 million followers: “The theme song for the 25th @007 film, written and performed by Billie, is titles ‘No Time To Die’ and will be released globally tomorrow at 4pm PT. #NoTimeToDie.”

The time for No Time To Die’s release means UK fans will be able to listen at midnight tomorrow night.

The tweet was accompanied by a teaser of the song, a haunting, atmospheric piano part.

Eilish has written the upcoming track with her brother and co-writer Finneas O’Connell.

She recently revealed to Access Hollywood that the track she’s penned for the upcoming Bond movie, No Time To Die, is “a ballad”.

READ MORE: COULD THIS GAME OF THRONES STAR BE THE FIRST FEMALE JAMES BOND?

Eilish was confirmed to be recording the new theme song last month, making her the youngest artist ever to perform the Bond theme.

“It feels crazy to be a part of this in every way,” she enthused. “To be able to score the theme song to a film that is part of such a legendary series is a huge honour.

“James Bond is the coolest film franchise ever to exist. I’m still in shock.”

Her co-collaborator and brother added: “Writing the theme song for a Bond film is something we’ve been dreaming about doing our entire lives.

The actor, who first appeared as 007 in Casino Royale, will bow out after his fifth film in the franchise.

No Time To Die will begin with Bond retired from active service and enjoying the quiet life in Jamaica.

The peace and tranquility of a live away from the action is soon shattered, however, by a visit from his old friend and CIA agent Felix Leiter (played by Jeffrey Wright).

Leiter ropes Bond back in by asking for his help rescuing a kidnapped scientist.

- Advertisement -
Facebook
Twitter
Pinterest
WhatsApp
Linkedin
ReddIt
Email
Tumblr
VK
Previous articleStorm Dennis to hit UK this weekend – how can you storm proof your home?
Next articleKelvin Fletcher and wife Liz Marsland look glum in new snaps after his night out with Oti