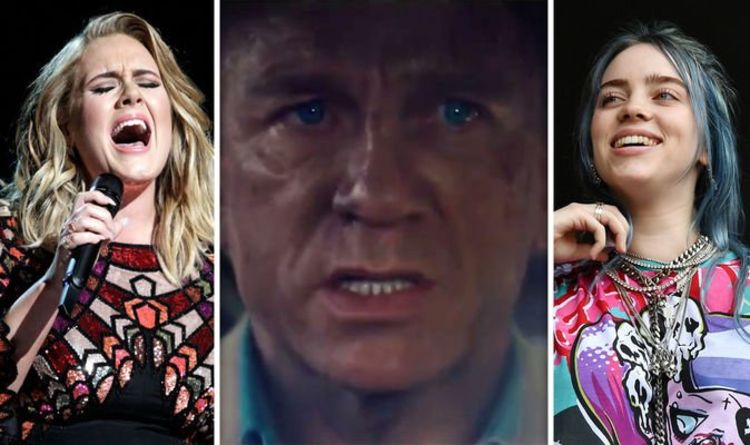 In research shared exclusively with Express.co.uk by Ginger Research, one song tops the bill with a whopping 24 per cent of the vote.

While this may not seem like a huge percentage, it is certainly higher than the 25th place song, Dr No by Monty Norman, which only gained a dismal three per cent of the vote.

Polling 2,000 Brits in February 2020, the researchers found it was a full-voiced woman who topped the list.

There have been many of these singers who have appeared in the 007 song list, with Sheena Easton and the incomparable Shirley Bassey taking to the recording studio.

However, it is Adele’s Skyfall which has topped the list, with the 2012 song earning the most votes for best song.

The song was the first ever James Bond credits song to win an Oscar, making it one which will go down in history.

Second place was given to Paul McCartney & Wings, which gained 17 per cent for the 1973 song Live and Let Die.

This song is truly the most innovative song of the Bond choices, as many take the form of big ballads with sweeping strings.

The third place song is Diamonds Are Forever, the 1971 hit from Shirley Bassey, which has become an iconic song and gained 16 per cent of the vote.

Bassey is occupying two spots in the Top Five, with Goldfinger coming in fourth place with 15 per cent, and Duran Duran’s 1985 song A View to a Kill gaining 13 per cent and coming in fifth.

More sultry ballads are in the list for the second half of the Top 10, with The Spy Who Loved Me’s Nobody Does it Better from Carly Simon and Sam Smith’s Writing’s on the Wall taking sixth and seventh places respectively.

The latter gained Smith an Oscar, making him the second person to win an Oscar for a Bond theme tune.

In eighth is Tina Turner for GoldenEye, the first movie to star Pierce Brosnan’s Bond, while Sheen Easton’s For Your Eyes Only and Chris Cornell’s You Know My Name from Casino Royale come in ninth and tenth.

The next songs clearly drop in popularity, with the songs only gaining single figures of votes.

Number 11 through to 13 are tied, with Die Another Day, The Living Daylights and From Russia With Love all coming with eight per cent of the vote, before The Man with the Golden Gun and Licence to Kill taking seven per cent each.

The most recent song for Bond 25, Billie Eilish’s No Time to Die, clearly did not win fans over, as it sits in 16th place with only six per cent of the vote, tied with Sir Tom Jones’ Thunderbolt from 1965.

These two are both from relative newcomers, with Tom Jones’ debut single only coming out earlier in the same year.

From here are a couple of more modern songs, with Sheryl Crow’s Tomorrow Never Dies and Quantum of Solace’s Another Way to Die from Jack White and Alicia Keys.

Both of songs gained six per cent of the vote, before Shirley Bassey’s third song, the 1979 Moonraker, came in with five per cent of the vote, as well as Nancy Sinatra’s You Only Live Twice, The World Is Not Enough from Garbage and On Her Majesty’s Secret Service from the John Barry Orchestra.

The bottom two songs, which received three per cent each, were All Time High from Octopussy, sung by Rita Coolidge, and the previously mentioned Dr No from Monty Norman.

Clearly the 1970s were the heyday for these songs, with many appearing in the Top Five, however the best song seems to still be from a British favourite, Adele.

No Time to Die is out in cinemas on April 2