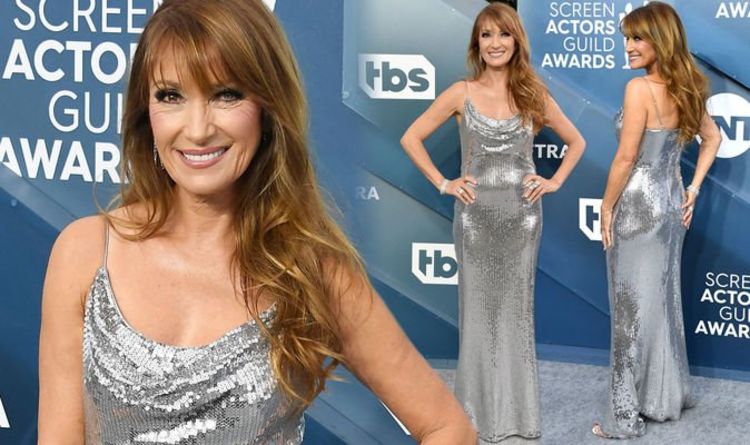 The actress, who is best known for starring in 1973 James Bond movie Live and Let Die and for being the lead in Dr. Quinn, Medicine Woman, put on a youthful display when she arrived on the red carpet at the star-studded Hollywood award ceremony.

Jane showcased her slim figure in a clingy silver dress from American-based Japanese designer Tadashi Shoji which shimmered and sparkled as she walked.

Wearing her signature red tresses in waves over her shoulders, the actress enhanced her natural beauty with smokey silver eyeshadow and a slick of pink lipstick.

She added even more sparkle to her ensemble with a collection of beautiful jewellery from Hearts On Fire.

A statement shooting star ring glistened on one hand while a diamond bracelet and coordinating ring twinkled on the other side.

Jane attended the event last night to show support for her The Kominsky Method co-stars, who were nominated for a SAG award.

The cast were put forward for the Outstanding Performance by an Ensemble in a Comedy Series accolade, but lost out on the night to The Marvelous Mrs. Maisel cast.

The actress played Madelyn in the Netflix series – a love interest of main character Norman Newlander played by Alan Arkin, 85.

Alan and his co-star Michael Douglas, 75, were both nominated for Best Actor gongs at the Hollywood event.