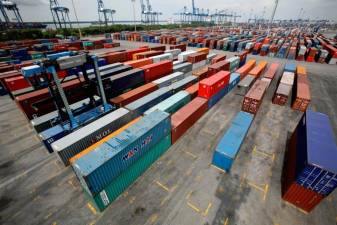 PETALING JAYA: Malaysia’s imports and exports are estimated to have contracted by 6.6% and 5.1% respectively in January, resulting in a RM12 billion trade surplus for the month, according to RAM Ratings.

“This is largely due to seasonally subdued regional industrial activity during the lunar new year festivities, compounded by industrial disruptions arising from the Covid-19 outbreak,’’ it said in a report.

The Department of Statistics is expected to release the January data tomorrow.

The rating agency said as the number of infections continues to rise, the outbreak is expected to remain a drag on global trade in the near term. It highlighted that the severity of Covid-19 is exacerbated by the fact that China is both the epicentre of the outbreak and a central node in the global value chain.

“China is the second largest source of value added in the world after the US; a respective 12.3% and 12.7% of global gross exports can be attributed to value-added generated in China and the US.”

In the Asean region, RAM Ratings observed that Vietnamese exports are the most vulnerable given its significant reliance on China’s output.

It said some 14.1% of Vietnam’s gross exports is attributable to value-added input derived from China, with the highest exposure recorded by machinery- and equipment-related exports. This is followed by Malaysia, with 7.7% of its exports relying on inputs from China.

“Much of Malaysia’s exposure centres on the electronics- and electrical-related sector, with 13.8% of its exported value consisting of Chinese-derived value-added input,” it added.