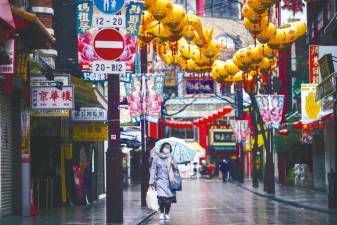 TOKYO: Japan today unveiled a second package of measures worth about US$ 4 billion (RM17 billion) in spending to cope with the fallout of the coronavirus outbreak, focusing on support to small and mid-sized firms, as concerns mount about risks to the fragile economy.

The package, totalling ¥430.8 billion (RM17.44 billion) in spending, shows how much pressure policymakers are under to bolster fragile growth and stem the risk of corporate bankruptcies, as event cancellations and a slump in tourism threaten to hit the broader economy hard.

To help fund the package, the government will tap the rest of this fiscal year’s budget reserve of about ¥270 billion, Japanese Prime Minister Shinzo Abe said.

The move is likely to affect what the Bank of Japan decides at its March 18-19 policy review. The central bank will aim to ensure that companies hit by the virus outbreak do not face a financial squeeze before the end of the current fiscal year in March, Reuters has reported.

Finance Minister Taro Aso said today there was no need yet for a bigger extra budget, adding that the fallout from the outbreak so far had not reached the scale of the 2009 financial crisis.

“We need to ascertain the current situation,” Aso told reporters after a Cabinet meeting, adding “There’s no saying” whether the government needs an extra budget.

As well as support for businesses, the new package will fund improvements to medical facilities and provide subsidies to working parents who must take leave because of closed schools.

Aso said financing will focus on small and tiny businesses in need over the next two to three weeks.

The financial watchdog has urged credit associations and regional banks to hold hearings with small businesses about their financial situation, he added.

Japan will boost to ¥1.6 trillion its special financing for small- and mid-size firms hit by the virus, up from about ¥500 billion previously announced, Abe said. – Reuters