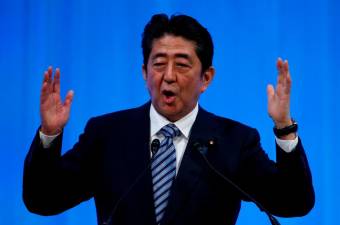 TOKYO: Japan’s economy shrank faster than initially estimated in the fourth quarter to mark the biggest drop in more than five years as capital expenditure slumped, casting a deeper shadow over the outlook as the coronavirus hit heightened recession risks.

The economy is under growing pressure as the outbreak disrupts supply chains and damages tourism, which follows the hit to consumption after October’s sales tax hike.

The bleak data piles renewed pressure on the government and the central bank to deploy stronger fiscal and monetary support to underpin a fragile economic recovery.

“Unfortunately, any recovery in Q1 has been nipped in the bud by the global spread of the coronavirus,” said Tom Learmouth, Japan economist at Capital Economics, adding that he was expecting the economy to contract 0.5% quarter-on-quarter in the current quarter.

“That’s likely to be primarily driven by plunging export volumes. And from late-February until the virus spread shows signs of dissipating, we expect consumer spending to be hit hard as many people self-isolate by staying at home.”

The world’s third-largest economy shrank an annualised 7.1% in the quarter to December, revised data showed on Monday, weaker than a preliminary reading of a 6.3% contraction and a bigger decline than a median market forecast for a 6.6% drop.

The decline, which was the fastest pace since April-June 2014, was blamed largely on a bigger-than-expected fall in capital expenditure – which had been considered the lone bright spot in an otherwise weakening economy.

The deeper contraction and the virus have fuelled fears Japan could see growth contract for two straight quarters in the current quarter – the definition of a recession – piling pressure on policymakers to deploy further stimulus steps.

Capital spending dropped 4.6% from the previous quarter, worse than a preliminary 3.7% decline and the biggest drop since 2009, in a sign soft global demand and the Sino-U.S. trade war took a toll on investment appetite.

Private consumption fell 2.8% from the third quarter, roughly in line with the preliminary 2.9% decline, as households withheld spending after a sales tax hike last October.

The weakness in domestic demand casts doubt on the Bank of Japan’s argument that robust capital expenditure will offset some of the pain from soft exports.

The BOJ may take steps next week to ease the financial strain of firms hit by slumping sales from the virus outbreak, sources have told Reuters.

Adding to the pain for the export-reliant economy, Tokyo’s Nikkei stock average fell 4% and the yen spiked as investors flocked to the safety of the Japanese currency.

A senior Japanese finance ministry official told reporters on Monday “nervous moves” were seen in the currency market and that he would watch moves with a greater sense of urgency.

If the yen’s spike continues, the BOJ may be pressured to take bolder steps beyond financial assistance to small firms, some analysts say.

The government, for its part, plans to compile a second package of emergency measures to deal with the virus on Tuesday, though any spending will be modest in size and funded by reserves set aside for emergency purposes.

Prime Minister Shinzo Abe has come under fire for his handling of the crisis as the number of coronavirus cases in Japan reached over 1,100, just as the nation prepares to host the summer Olympic Games in July and August. – Reuters

ByGabby Orr “In this case, today is the best day that we’ve ever had... We’re doing really well. I just want to project that to...
Read more