Jennifer Aniston: Friends bombshell sizzles as she strips down to... 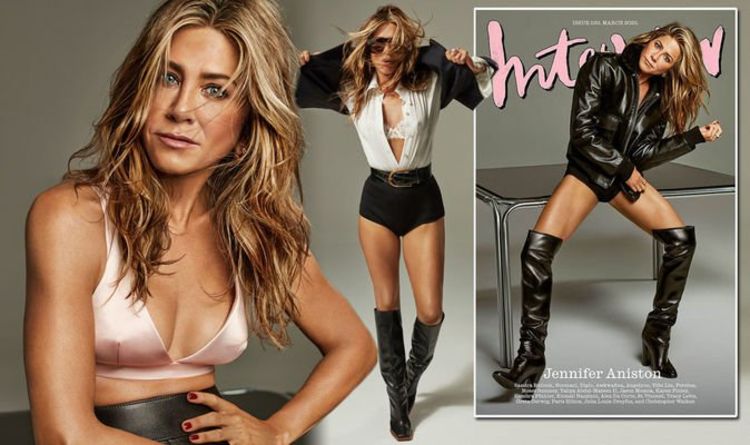 The American actress showcased her sensational age-defying body on the cover of Interview magazine, which coincidentally came out on the same day as her birthday.

The Morning Show star, who shot to fame in the 1990s TV show Friends, put on a leggy display in a sexy pair of hot pants and leather boots.

In the pictures, Jennifer, who recently won a Screen Actors Guild Best Actress award for her portrayal of Alex Levy in The Morning Show, flaunted her incredible figure.

On the cover, she smouldered in a black leather jacket and knickers worn with a pair of thigh-high leather boots which drew attention to her toned pins and thighs.

The sexy TV and movie star wore her blonde tresses loose over her shoulders while striking a pose for the camera.

Other images show her removing her jacket to reveal an undone white shirt and lace bra as well as pink satin lingerie and leather pencil skirt.

Taking to social media, Jennifer shared some pictures from the photoshoot with her 27.7 million followers.

Alongside the images, she wrote, “Thank you @interviewmag for this birthday surprise. I had no idea this would be coming out today.”

Reflecting on her age, the actress continued: “Feeling proud and honored to be celebrating with this cover. Thanks to the Interview team for celebrating women at every age… turns out 51 is pretty fun.”(sic)

Thanking team behind the pictures, and also fellow actress Sandra Bullock, 55, who conducted the interview, she added: “And thanks to @nickkharamis, @melzy917, @alique_studio, @mrchrismcmillan, @gucciwestman — and my sister from another mister Sandy Bullock for talking to me about whatever the hell we were talking about. I love you so much.”