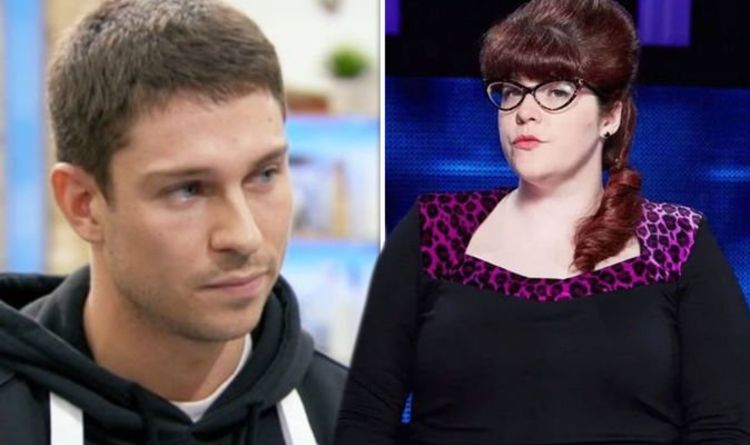 The Vixen star opened up about her time on the BBC show on the podcast Desert Island D***s, in which she revealed who she thinks would be the worst people and things to be stuck on a desert island with.

She began by explaining she didn’t want to “burn bridges” with anyone she mentioned on the podcast, but went on to address her time with reality star Joey.

Jenny told presenter Dan she was “thrown in at the deep end” to captain a team on Celebrity MasterChef, in which they were tasked to make a dish for 60 people in Dover.

Discussing her experience, she explained: “I’ve met people who have been on those [reality] shows and they have been lovely, however, going back to that thing of, ‘Oh they’re probably really nice in real life’ I was on Celebrity MasterChef last year and my team included Mr Essex.

“I kind of assumed it [his personality] was a bit of a persona, when you get into that situation, the nice cooperative side of you tends to come out.”

She added: “I’ve watched that show for many years and I thought everybody just knuckles down, everybody gets stuff done that needs doing because you don’t want to mess up the other people, it’s the team work vibe.

“That was true of everybody except for the man who, I describe him as my nemesis, he has no idea he’s my nemesis.”

She added: “I spent much of the time allocated to us to cook these 60 portions cajoling [and] bossing Joey about, trying to find things for him to do and then trying to explain to him how to do them.

“Then, watching him make a half-hearted attempt to do them before [he made] an excuse about why he couldn’t do that task and then having to find him another task.”

“At one point, Razor had to step in and very carefully explain to Joey how to fillet a fish.

“Joey actually did it, even though he complained he was scared of fish and hated fish and he hated the smell of fish and wouldn’t touch a fish.

“It was the most frustrating [time], I’ve got PTSD about it,” she added, which prompted the podcast’s host to laugh.

The quizmaster added: “I had no preconception about the guy before taking up this challenge.

“I thought, I take people as I find them and I want to give him a chance and the fact he put this additional workload onto everybody else just showed that he doesn’t seem to be a very nice person.”

A representative for Joey declined to comment when approached by Express.co.uk.

The former TOWIE star was sent home from the competition after failing to impress judges Gregg Wallace and John Torode with a self-made dish he named a Stirotto.

Jenny also later got the boot after cooking a pie, chips and peas for a “fictional friend”.

The BBC cooking competition was won by Greg Rutherford.

{authortext} Back in February, the star came out as gay during an emotional appearance on This Morning. Since the admission, Phillip has continued to...
Read more