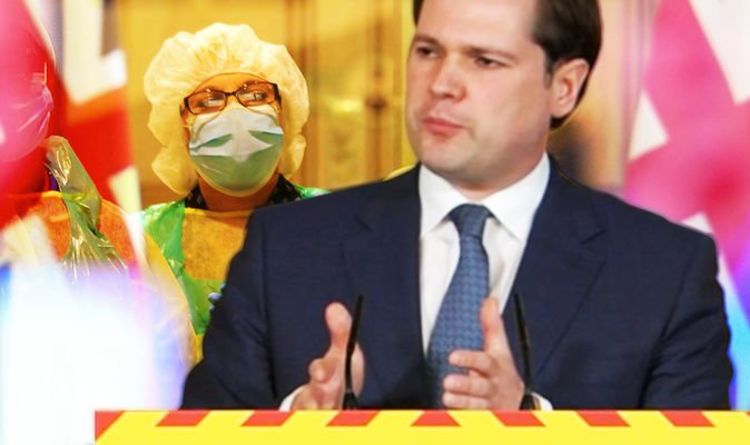 Robert Jenrick, who is leading today’s coronavirus briefing, has unveiled NHS workers are in for a large shipping of PPE equipment. He said: “A very large consignment of PPE is due to arrive in the UK tomorrow from Turkey which amounts to 84 tonnes of PPE and will include for example 400,000 gowns. So a very significant additional shipment but demand is also very high.”

But Dan Hewitt from ITV News pointed out a huge problem with the shipment, as 400,000 gowns will only last NHS workers three days.

“On the gowns I think you said 400,000 will be delivered in the next couple of day but that only covers three days worth of supply for the NHS.

“They use about 155,000 a day so that’s a small amount given this is going to go on for several weeks and months.”

In response the Communities Secretary said: “Demand is extremely high and quantities are in huge demand internationally but we will continue to work as hard as we can.

“Those healthcare workers who are on the frontline again should know that we completely understand their anxiety and we are doing all we can to try and get them the equipment that they need as quickly as possible.”

The announcement of the large PPE equipment comes after NHS staff were issued new guidance on how to use PPE.

This includes reusing PPE, such as gowns, if they were to run out.

This goes against guidance from both Public Health England and the World Health Organization.

As well as the large shipment, Mr Jenrick said British manufacturers would join the effort to produce more equipment, such as gowns.

He said: “We are working with British manufacturers to ensure that they can make a contribution, and you’ve heard of some of the more prominent ones like Burberry and Barbour but there are many SMEs as well being involved in that, and my department is also involved in trying to ensure that the supplies that we have get out, not just to the NHS, critical though that is, but also to social care, often to smaller establishments like care homes, all across the country.

“There’s over 50,000 healthcare settings like that in the country, and we’re using local resilience forums, backed by almost 200 military planners to do the logistical task of taking the stocks that we do have, and getting them to the front line, but I completely accept that this is extremely challenging.

“Supply in some areas, particularly gowns and certain types of masks and aprons, is in short supply at the moment, and that must be an extremely anxious time for people working on the front line, but they should be assured that we are doing everything we can to correct this issue, and to get them the equipment that they need.”

Professor Stephen Powis, the national medical director for NHS England, said PPE was a very personal issue for him as a doctor himself.

He said the guidance surrounding PPE was professionally agreed two weeks ago for that stage of the epidemic.

He said he knew the Government was working hard but it is absolutely critical “above anything else” to get supplies of PPE to the frontline.

Chris Hopson, the chairman of NHS Providers, said he estimated hospital trusts could run out of protective equipment within the next 24 to 48 hours.

He said national stock of fully fluid repellant gowns and coveralls had been exhausted due to the rapid increase in demand for the equipment.

As a result of shortages, many doctors and nurses have been forced to treat patients without full length waterproof gowns, and even use plastic aprons as an alternative.