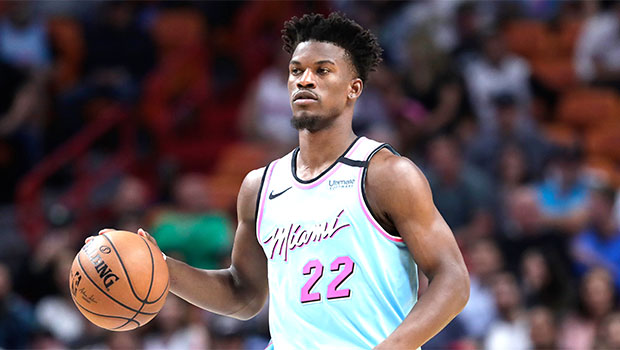 Social media is a-buzz with rumors that basketball star Jimmy Butler was spotted out to dinner in New York City with Selena Gomez! Learn more about the Miami Heat player.

Twitter seems to think that there might be a new man in Selena Gomez‘s life, and apparently it’s Jimmy Butler? In mid-November, one Twitter user posted, “Jimmy butler and selena gomez weird couple man,” adding, “Sources: Dude just trust me.” The owner of the account, who claims to be an “NBA insider,” did not reiterate on the initial tweet.

But as fan speculation continued to grow, another Twitter user found out that the “Lose You To Love Me” singer, 28, and NBA player, 31, were allegedly spotted at Lucien in New York City, as reported by the Miami Herald. HollywoodLife has reached out to both Jimmy and Selena’s reps for a comment and we have not independently verified that the social media speculation is true. As fans dig deeper into these rumors, learn more about the Miami Heat player!

1) Jimmy Butler currently plays for the Miami Heat. Jimmy signed with the Miami Heat in July 2019. He has had a great showing in his career since becoming part of the team and even reached a major milestone. Following a turbulent season due to the coronavirus pandemic, Jimmy and the Miami Heat reached the NBA Finals in October. His best game came in the third face-off against the Los Angeles Lakers, where he scored 40 total points, 11 rebounds, and 13 assists for the team. The Miami Heat would fall to the Lakers with a final 4-2 game total.

3) Jimmy is an Olympic gold medalist! You read that correctly. Along with his honors as a basketball player in the NBA, Jimmy and his teammates gained international acclaim after winning the gold medal at the 2016 Rio de Janeiro Olympics.

4) He has quite the social media following. Jimmy has both an Instagram and a Twitter account. On the latter, Jimmy boasts over 745K followers. While on Instagram, the basketball player has earned nearly six million followers. As of publishing time, he hasn’t been active on Twitter since September.

5) He’s incredibly private when it comes to his personal life. Prior to these newfound social media rumors taking over Twitter, Jimmy’s personal life was rarely, if ever, in the spotlight. He and his unnamed girlfriend welcomed a daughter in October 2019, causing Jimmy to miss the first few games of the 2019-2020 season.