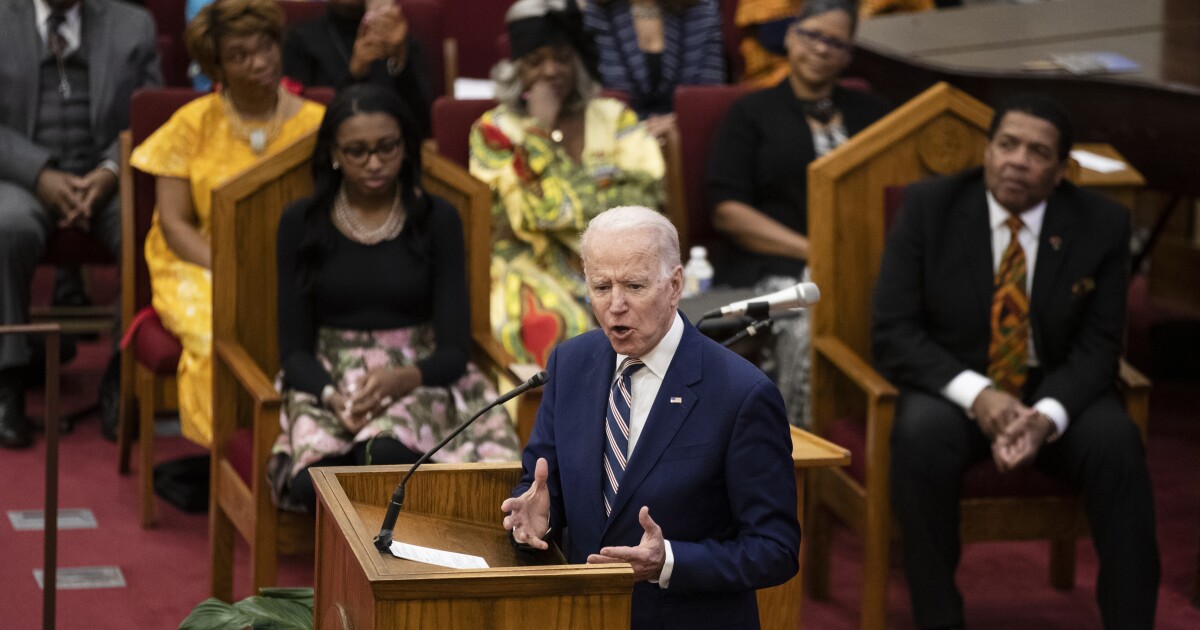 Former Vice President Joe Biden, leaving Las Vegas behind, is placing all his chips on South Carolina as his best — and perhaps last — chance to reverse a string of losses in early-voting states and mount a serious challenge to Sen. Bernie Sanders for the Democratic nomination.

As the Democratic contest moves here, the electorate for the first time this primary season will feature an African American majority, testing support for the candidates among a key segment of the Democratic base. Saturday’s primary also marks the final single-state contest before the race dramatically widens to 14 states, including California, which vote on March 3, Super Tuesday.

If Biden doesn’t clean up here, where he has longstanding personal and political ties, the result could wipe out the remaining hope for the candidate once considered the front-runner in the Democrats’ 2020 presidential campaign.

“If he were not to win South Carolina, he would be in a precarious position,” Rep. James E. Clyburn, a powerful South Carolina Democrat who is the highest-ranking African American member of Congress, said in an interview. Clyburn has not yet endorsed any 2020 candidate but said Sunday that he would do so later this week.

But Biden, speaking to reporters after attending services at a largely African American congregation in North Charleston, expressed confidence that he would prevail here and emerge as the sole, viable alternative to Sanders.

“I think it’s going to be Bernie and me going into Super Tuesday,” he said.

Biden appears to have come in a distant second in Saturday’s Nevada caucuses, walloped by Sanders, with about 60% of the vote reported. The Vermont senator won more than twice as much of the vote, solidifying his position as the front-runner in the contest.

Pete Buttigieg’s campaign has questioned some of the results, saying its own figures indicate the former South Bend, Ind., mayor got more votes than Biden.

For Biden, second would be an improvement over his fourth-place finish in the Iowa caucuses and fifth-place showing in the New Hampshire primary, and he cast the results as the beginning of a comeback.

“You have in your hands the power, unlike any time in a long time, to determine who the next Democratic nominee will be,” he said Sunday, speaking to the congregation at Royal Missionary Baptist Church in North Charleston.

He added that he did not take African American voters’ support for granted.

Some political figures here believe Biden continues to have a shot in a state where he was once the undisputed leader.

“He’s moving up,” Clay Middleton, a South Carolina political strategist who advised New Jersey Sen. Cory Booker’s unsuccessful presidential campaign, said. “However, he needs to win the debate” when the candidates confront each other here Tuesday. “He has to own that stage.”

None of the other top contenders has quite as much at stake here as does Biden — a fact reflected in their schedules, which were heavy with appearances in Super Tuesday states.

Buttigieg made a brief appearance here, then held a town hall in northern Virginia. Sen. Elizabeth Warren of Massachusetts headed to Colorado and plans a rally in San Antonio later this week.

Sanders was already in Texas when he celebrated his Nevada triumph Saturday night; he stayed there Sunday for rallies in Houston and Austin.

In Houston, he largely ignored Biden, but sought to rebut Democratic establishment figures who worry he would lose to President Trump, reeling off a series of polls showing him beating Trump in key states.

Some people in the “corporate media” get “agitated and nervous,” he said. But “we are gonna win here in Texas, and in November we are gonna defeat Trump here.”

The election is “about taking back our country,” she told an audience of several hundred in Fargo, N.D. “It’s about stopping the mean tweets at 4 in the morning and stopping the drama.”

Biden’s campaign, by contrast, has moved staff from Super Tuesday states to South Carolina. Even so, they are outnumbered by the staff of some of his principal rivals.

In South Carolina, Biden is battling not just Sanders but also billionaire Tom Steyer, who has eclipsed everyone on air here, with more than $ 13 million in broadcast and digital ads, and gone on a campaign spending spree targeting black voters, who make up about 60% of the state’s Democratic primary electorate. Steyer also spent heavily in Nevada, but ended up not winning any delegates to the nominating convention.

South Carolina is friendly territory for Biden not only because it is the first of the early-voting states with a large population of black voters, a pillar of Biden’s political strength, but also because of long-standing ties he has with the state’s political leadership.

But Biden’s once-commanding lead in South Carolina polls has seriously eroded — even among black voters.

For most of 2019, polling averages showed Biden with a lead here of some 20 points, but that fat cushion has all but vanished.

A new CBS/YouGov poll of the state, released Sunday, showed Biden leading with 28%, but Sanders close behind, with 23%. Steyer had 18%, followed by Warren with 12%, Buttigieg with 10% and Klobuchar with 4%. Michael Bloomberg, the billionaire former New York mayor, is not on the ballot here.

Biden’s strength in South Carolina among black voters is widely attributed to his role as vice president to Barack Obama, who remains a hero to many in the state.

“Barack chose him out of a long list of people he knew to be his vice president. So that goes a long way with me,” he said.

And Biden sought to use Obama’s legacy as a weapon against Sanders, pointing to a report in New York magazine that Sanders had considered mounting a primary challenge to Obama’s reelection in 2012.

“Bernie and I have real disagreements on support for Barack,” he said.

Sanders campaign manager Faiz Shakir denied that report, citing a 2011 interview in which Sanders said he was not planning a primary challenge.

Beyond his support among black voters, Biden has other long-standing personal and political ties to the state. He was close to the late South Carolina Sen. Ernest “Fritz” Hollings, an iconic political figure who introduced him to political leaders throughout the state. Biden delivered the eulogy at Hollings’ 2019 funeral.

In a tribute to Biden’s roots in a more bipartisan era that seems foreign to many young Democrats today, he also in 2003 gave a eulogy for Sen. Strom Thurmond, the former segregationist Republican senator from South Carolina. And for decades, Biden and his family have vacationed in South Carolina.

In an interview Sunday on NBC’s “Meet the Press,” Clyburn offered some criticism of Biden, saying he had not been forceful enough so far in laying out for voters why he should be their choice.

But in an interview on ABC’s “This Week,” he warned that having Sanders as the nominee could put the Democrats’ House majority in jeopardy.

“I think that that would be a real burden for us in these states or congressional districts that we have to do well in” to keep the majority, he said. “It’s going to be tough to hold onto these jobs if you have to make the case for accepting a self-proclaimed democratic socialist.”

Some of Biden’s old-fashioned political skills of bipartisanship and relationship building may be less powerful amid today’s fierce politics of a more-liberal Democratic Party preoccupied with beating President Trump and now on course to nominating a fiery candidate like Sanders.

“It’s breaking my heart,” said Joanne Letendre, a 71-year-old Biden supporter. “It’s like he doesn’t want to yell and scream. But in a world that yells and screams, he needs to defend himself.”

Marlon Kimpson, a South Carolina state senator backing Biden, said voters in South Carolina — a state that kept Thurmond and Hollings in office for a combined 87 years — have a tendency to favor politicians they know well.

Kimpson said he is telling moderate voters to consider voting for Biden rather than other lower-polling moderates like Buttigieg and Klobuchar.

“Moderate South Carolina voters need to ask themselves whether a vote for a candidate that is polling in single digits is a vote for Bernie Sanders,” Kimpson said.

Old-fashioned virtues and Biden’s decades of experience are still attracting voters like Cornell Johnson of Moncks Corner, S.C., who is unfazed by Biden’s early-state losses.

“He has a moral compass,” said Johnson as he waited at the brewery for Biden’s sister to speak. “It’s not always the swift that wins. It’s endurance. Not quitting.”

ByDanielle OngKEY POINTS Fauci said he was not surprised that Trump contracted the novel coronavirus following the Rose Garden event The superspreader event was attended by...
Read more