John Major U-turn: How PM stood up to EU and ‘thwarted plans for further integration’ 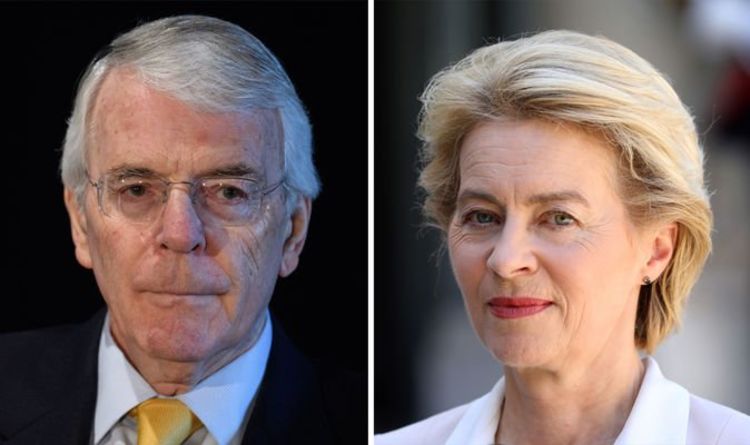 This is when Mr Major adopted a policy of non-cooperation with the EU in 1996, in a furious response to its worldwide ban on British beef exports. He refused to attend European Council meetings and withheld the UK’s Commissioner. This meant the UK was de facto vetoing any proposed legislation, grinding processes in Brussels to a halt.

It is understood that many EU officials are always working towards increased political union, so this non-cooperation would have frustrated any efforts to make these changes.

It also forced the EU to come to the table earlier than they would have liked in order to resolve the crisis.

Bovine Spongiform Encephalopathy (BSE) – or mad cow disease – caused a multitude of problems for the UK in the Nineties.

The Tory government had admitted that BSE could be transmitted to humans in the form of Creutzfeldt-Jakob disease and so the EU issued a worldwide ban on British beef and by-products.

The UK could not export to any country in the world, so farmers took a huge hit as their cattle prices plummeted, school meals took meat off the menu and thousands of cows were lined up for slaughter.

This triggered an angry backlash at home, with an editorial in The Sun declaring that “John Bull has been neutered”.

People felt that if Brussels had the power to stop Britain exporting, then it could no longer consider itself an independent, sovereign nation.

Eurosceptic backbencher Sir Teddy Taylor suggested the UK retaliated with a ban on French wine and beef, while Bill Cash wanted to take the European Commission to court.

“We cannot continue business as usual with Europe when we are faced with a clear disregard by some of our partners of reason, of common sense, and of Britain’s national interest.”

His policy of non-cooperation was an unusual show of strength and by June 11 the European Commission lifted the ban on British beef by-products.

Just over a week later, the parties came together and agreed on a deal to gradually lift the ban at a summit in Florence, Italy.

The UK also issued proceedings in the European Court of Justice (ECJ) seeking an annulment of the ban, but the court rejected the bid.

However, despite the Florence agreement, there remained some restrictions on British beef for another 10 years, only concluding in 2006.

Over one million cattle were incinerated and British cattle farmers suffered considerably.

In 2000, The Economist noted that “even while some European countries were clamouring for bans on British beef, they were ignoring warnings from the European Commission about how to avoid the spread of BSE in their own herds”.

All this soured relations between the UK and the EU considerably, leading to serious questions being asked about its membership.

ByIn recent weeks, experts have raised concerns over “debilitating” work stress suggesting there will be significant impacts upon wellbeing. But thanks to the pilot of a revolutionary...
Read more