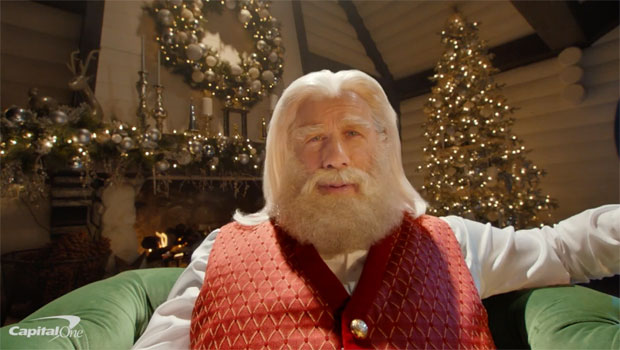 John Travolta strapped on Santa Claus’s beard for a Capital One commercial, in which he reunited with his old co-star Samuel L. Jackson and did his ‘Pulp Fiction’ dance!

Meet the new Father Of Christmas (well, in the world of Capital One credit cards): John Travolta! The 66-year-old actor transformed into Santa Claus, complete with a full white face beard and long, icy hair, for a Capital One commercial that was released on Nov. 20. As Santa Travolta reviewed his over 145 million online shopping orders — even Santa’s on lockdown amid the pandemic — legendary actor Samuel L. Jackson called in via video chat.

Samuel, who once starred alongside John in the 1994 cult classic Pulp Fiction, rang in to inform “Santa” about Capital One’s feature that instantly applies shopping coupons while checking out from online stores. The 71-year-old icon was no longer wearing the trademark business suit that he and John donned in Quentin Tarantino‘s film, though. Instead, he wore a Santa hat and festive T-shirt that read, “Happy Holidays ‘With Cheese.” Could that be a reference to John’s “Royal with Cheese” line from Pulp Fiction?

At the end of the commercial, John (as Santa) jumped up to have a little dance party with Mrs. Santa Claus, which was a recreation of John’s dance competition scene with Uma Thurman in Pulp Fiction. There might have been a third movie reference, too — see if you can catch it by watching the clip above!

Not only was it heartwarming to picture the star of Grease star buying $ 90 billion worth of Christmas gifts for the children and elves of the world, but it was also sweet to see John getting silly with his old co-star after a tragedy earlier this year. In July of 2020, John lost his wife of 28 years, Kelly Preston, after the Jerry Maguire star suffered a two-year battle with breast cancer. Kelly was only 56 years old when she passed away.

John and Kelly also shared three children: son Benjamin, 10, daughter Ella, 20, and their late son Jett, who died after having a seizure in 2009. In August, John and Ella shared a sweet clip of their father-daughter dance in honor of Kelly. “One of Kelly’s favorite things, dancing with me,” John had written under the tribute. Kelly would’ve loved to see John showing off his Pulp Fiction moves yet again!