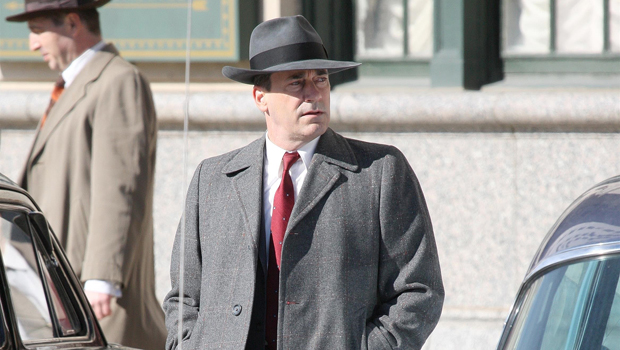 Jon Hamm is just made for roles set in the 1950s and 60s. He looked like he stepped right out of a ‘Mad Men’ scene on the set of his new movie ‘No Sudden Move.’

On first blush, new photographs of actor Jon Hamm make it look like he’s back shooting the early seasons of Mad Men. While he looked exactly like his handsome advertising exec Don Draper from the AMC drama, the 49-year-old was dressed for the year 1955 in the new Steven Soderbergh-directed crime thriller No Sudden Move. Jon looked so dapper in a grey suit with a white shirt and red tie. He had a long grey coat over his ensemble and a grey fedora hat that was literally something straight out of Mad Men.

The movie takes place in 1955, when men still wore hats to go out in public. That look was still around in the early to mid 60s, as fans of Mad Men know. That series spanned the entire decade from 1960 through 1970, and eventually Don Draper’s hat disappeared in the later episodes, as the look had fallen of style by the late 1960s. Ultimately Don finally got in touch with his inner hippie by the last episode, when he came up with the iconic Coca-Cola jingle at a retreat in Big Sur, CA.

Jon’s look with Don was slow to evolve, as the character wasn’t young, hip and changing with the times as quickly. He held on to the classic looks of the early 1960s, and Jon’s face, hair and frame are just so suited for that particular era. Which is probably why he was so darn believable in the character. Well, that and Jon’s a damn fine actor who was finally rewarded with the Outstanding Lead Actor in a Drama Series Emmy in 2015 for the show’s final season.

Jon is part of an ensemble cast in the new HBO Max film, which also stars Don Cheadle, Benicio Del Toro, David Harbour and Ray Liotta. According to our sister site Deadline, the movie centers around “small-time criminals who are hired to steal what they think is a simple document. When their plan goes horribly wrong, their search for who hired them – and for what ultimate purpose – weaves them through all echelons of the race-torn, rapidly changing city.”

While we love seeing Jon back in his iconic Mad Men look for No Sudden Move, he’s going to be getting a modern day treatment for his next appearance on the big screen — or home wide-screen depending when theaters ever open due to COVID-19. Jon is starring as a vice admiral in the highly anticipated new Tom Cruise film Top Gun: Maverick  — an update to the 1986 smash — which is due out in 2021. Jon told HollywoodLife.com EXCLUSIVELY at the Mercedes Benz Academy Awards viewing party on Feb. 9, 2020, “It was a phenomenal experience working with Tom. Really, really enjoyed it. He’s such a great guy and he’s such a wonderful actor.”