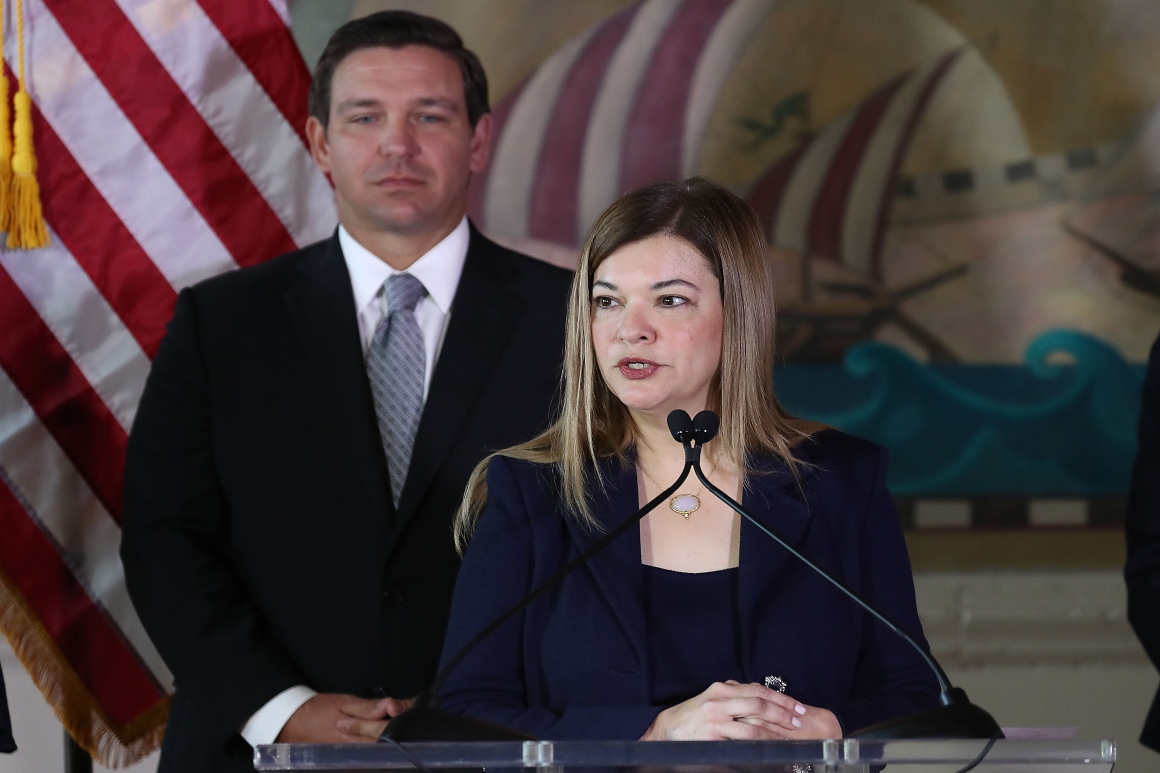 Critics say the effort — framed as an attempt to protect the physical safety of judges and their families — is on a collision course with the First Amendment. It could also complicate efforts to vet judicial nominees and to assess their conflicts of interest after taking the bench, lawyers say.

The new push to lock down a broad swath of personal information about judges was prompted by a tragic incident in July, in which the son and husband of a New Jersey-based U.S. District Court judge were shot at the doorway of her home — apparently by a deranged attorney who may have been angry over the slow pace of a suit he’d brough challenging the exclusion of women from draft registration.

On Sept. 4, a group representing federal judges — the executive committee of the Judicial Conference — sent congressional leaders an urgent request seeking “immediate legislative action” to head off future violence and stem a rising tide of threats against judges and their families.

“We are seeking legislation to enhance protection and prevention of unauthorized release of judges’ and immediate family [personal information] particularly on the internet,” U.S. District Court Judge Claire Eagan told reporters last week following a virtual meeting of the Judicial Conference. “There is so much talk about cases and about judges, on the internet, that contains personal information.”

Eagan also said the courts are also looking to set up a system to “monitor proactively” personal information and threats to them online and elsewhere.

The proposal urges Congress to create a legally mandatory takedown mechanism that would give anyone 48-72 hours to remove such details “from the public record” if a judge requests their deletion. The Judicial Conference asked lawmakers to give judges and the government the right to sue to force compliance. The proposal also called for “limited criminal enforcement authority.”

“We’re asking that the legislation require that when a written request by a judge or his or her representative is submitted, this will result in a mandatory redaction or removal of the personal information,” Eagan said.

By its terms, the proposal would apply not only to sitting and retired judges, but to all judicial nominees as long as their nominations are pending before the Senate.

Advocates for court transparency called the proposal a dramatic overreach by the judiciary.

“What they’re saying is the First Amendment doesn’t apply to judges, which is just awful,” said Gabe Roth of Fix the Court, which advocates for openness at court proceedings and on details about judges’ financial ties. “Obviously, I’m very sympathetic to the concerns about attacks on public officials, especially judges, [but] I can’t imagine that any lawmaker would take this seriously.”

Legal experts also expressed doubt about whether the provision would meet First Amendment standards, despite the fact that it originated with a panel of federal judges.

“My hope is this is going to get tightened up,” said University of California at Los Angeles law professor Eugene Volokh. “It would need to be narrowed considerably in order to survive a challenge under the First Amendment.”
Volokh said that while some of the information would almost never be of public concern, a number of the items on the judicial list could be relevant to whether a judge is being fair or has the appearance of doing so.

“People need to be able to talk about whether a judge needs to recuse due to some conflict of interest,” Volokh added. “These are perfectly legitimate things for people to talk about.”

However, the plan to protect judges’ personal information has one extraordinarily impassioned and powerful voice backing it: Esther Salas, the New Jersey judge who recently lost her son and saw her husband wounded.

“I am asking everyone to help me ensure that no one ever has to experience this kind of pain,” she said in an emotional video statement released last month. “We may not be able to stop something like this from happening again, but we can make it hard for those who target us to track us down.”

“The free flow of information from the internet allowed this sick an depraved human being to find all our personal information and target us,” the judge declared. “In my case, the monster knew where I lived and what church we attended and had a complete dossier on me and my family. At the moment, there is nothing we can do to stop it and that is unacceptable.”

The plan the judiciary has offered would appear to give judges greater protection for their personal details than executive branch officials or lawmakers currently receive.

A federal law passed in 2008 makes it a crime to disclose a narrower set of personal information about federal officials, including lawmakers and judges. It covers only the sharing of a Social Security number, home address, home or mobile phone number, personal email or home fax number.

In addition, under current law, disclosure is only a crime if the release is part of an effort to threaten, intimidate or incite a crime of violence against an official or his or her family. The statute was used in 2018 to prosecute a former Democratic Senate staffer who released several GOP senators’ home addresses and phone numbers online out of anger at their handling of the confirmation hearings for Brett Kavanaugh.

The judicial proposal seeks to drop the intent requirement and significantly expand the scope of what’s deemed personal information.

Some experts said the nature of the internet does call for placing greater limits on the kind of personal information the public can access about judges and other officials.

“This makes sense to me—to limit the amount of personally identifiable information for both executive branch officials and judicial officials that is available both on the internet and to eight billion people around the world,” said former State Department legal adviser John Bellinger. “It shouldn’t just be put up on the internet for anyone to see.”

Bellinger was a vocal opponent of a law Congress passed in 2012 that would have automatically posted many federal employee financial disclosures and investment transactions online. The law was aimed at cracking down on insider trading, but it drew an outcry from employees across the government who said they feared identity theft, financial scams and even targeting by hostile foreign intelligence agencies. President Barack Obama signed a repeal of many of the requirements the following year.

The Senate Judiciary Committee routinely asks judicial nominees to list all associations and clubs they belong to and to detail whether any of them discriminate on the basis of race, sex, religion or national origin. Under the new proposal, those answers could also be put off limits by a judge as personal information. Even if the questions were asked, the answers could be scrubbed before a questionnaire is made public.

Bellinger said criticism of some items on the list judges want to protect sounded “fair” and added he would oppose language that allowed judges to prevent disclosure of their membership in professional groups.

“You shouldn’t be able to hide something like that,” the attorney said. “I don’t know quite how you strike the balance. … The balance has to be struck in a different place in 2020 than it was struck maybe 50 years ago.”

The judiciary has struggled to find that balance in the internet era. In 1999, the crime news site APBNews.com sued the court system after it refused to comply with the site’s request for financial disclosures on every federal judge.

A judicial committee said it feared that posting the information on the internet could expose judges to harm, but Chief Justice William Rehnquist and the broader Judicial Conference eventually reversed that position and released the records.

The lawyer who brought the suit two decades ago, Mark Zaid, said he’s sympathetic to Salas’ concerns and those of other judges. Earlier this year, a Michigan man was indicted for threatening to kill Zaid, apparently over his role representing a key figure in the Trump impeachment saga.

However, Zaid said trying to suppress websites with information about judges seems misguided. “It’s tricky and difficult and I’m not sure this is the right way to go about it,” said Zaid, who often represents journalists, including from POLITICO. “We should be careful in the wake of tragedy not to go too far in terms of trying to do the right thing.”

Even some parts of the new proposal unlikely to draw much objection, like protecting details about judges’ and nominees’ minor children, could be tricky to enforce. Children and family members of nominees have often been introduced by them at confirmation hearings that are open to the public and streamed on the internet, but under the proposal that, too, could be subject to a takedown order and might even be stricken from official transcripts of the event.

“You hear stories sometimes that a judge’s child was involved in some crime and then the charges are dropped and then the question is asked: Did he get a sweetheart deal? It’s very hard to talk about that without any identification of the child,” the professor said.

Spokespeople for House and Senate Judiciary Committee leaders did not respond to requests for comment on the judges’ proposal.

A spokesman for the federal courts, David Sellers, stressed to POLITICO Wednesday that the letter presented an initial round of suggestions and no formal legislative language. He also insisted there is no intent to limit legitimate debate about judicial nominees or court rulings.

“This is very early in the conversation,” Sellers said. “These are broad principles that are the beginning of a conversation with our Congressional contacts. … Nobody’s goal is to limit transparency that’s needed in assessing judicial nominations or judges in any other capacity. It’s to safeguard the personal data that often is associated with it.”