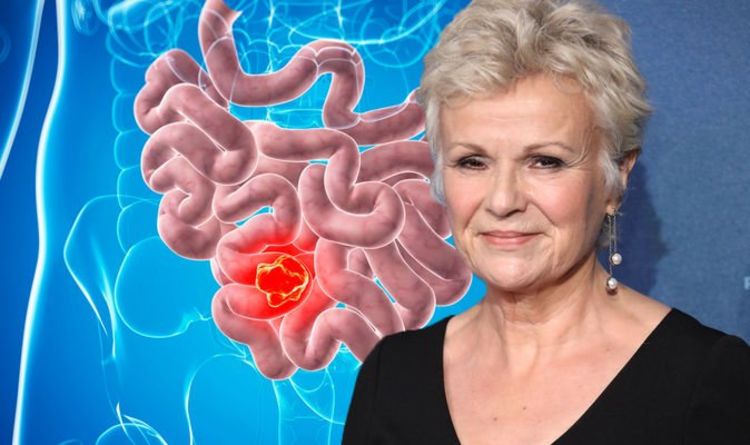 Dame Julie Walters has revealed in an exclusive interview with BBC’s Victoria Derbyshire that she was diagnosed with bowel cancer 18 months ago, with two primary tumours in her large intestine. Luckily, the actress was given the all clear after undergoing chemotherapy. The 69-year-old said she had first gone to see her doctor a year earlier with indigestion and “slight discomfort”, and later returned with symptoms such as stomach pain, heartburn and vomiting.

She was then referred to a gastric surgeon, where she had a CT scan.

The actress had been on set filming The Secret Garden when she received a phone call asking her to come in. The specialist told her they had found an abnormality in her intestine, and feared it was cancer.

Recalling her initial reaction at the time, she said: “I was still thinking, ‘That’s ridiculous, he must have made a mistake’. I couldn’t believe it.”

According to Cancer Research UK, stomach pain and being sick are symptoms that typically arise when the cancer blocks the bowel. This is called a bowel obstruction.

Other symptoms associated with bowel obstruction include:

What are the main symptoms of bowel cancer?

More than 90 percent of people with bowel cancer have one of the following combinations of symptoms:

“The symptoms of bowel cancer can be subtle and do not necessarily make you feel ill. However, it’s worth trying simple treatments for a short time to see if they get better,” explains the NHS.

According to the health body, you should contact your GP if you have one or more of the symptoms of bowel cancer, and they persist for more than four weeks.

DON’T MISS
Lyme disease symptoms: A certain feeling in the head could be a warning sign [INSIGHT]
Throat cancer symptoms: The peculiar warning sign that lies in a person’s ear [INSIGHT]
How to get rid of visceral fat: Why this popular food may reduce the dangerous belly fat [TIPS]

If it’s detected early enough, treatment can cure bowel cancer and stop it coming back.

How is bowel cancer treated?

Treatment for bowel cancer will depend on which part of your bowel is affected and how far the cancer has spread.

Surgery is usually the main treatment for bowel cancer, and may be combined with chemotherapy, radiotherapy or biological treatments, depending on your particular case, according the NHS.

In the BBC interview, Dame Julie shared specific details about her surgery, revealing she had “30cm taken out of my colon” in hospital.

She also divulged that she was initially reluctant about undergoing chemotherapy, but found it “fine”.

Chemotherapy is a cancer treatment where medicine is used to kill cancer cells.

There are many different types of chemotherapy medicine, but they all work in a similar way.

“They stop cancer cells reproducing, which prevents them from growing and spreading in the body,” explains the NHS.

ByThe increase in body fat and the distribution of fat in the body was measured using a magnetic resonance imaging (MRI scans) before and...
Read more