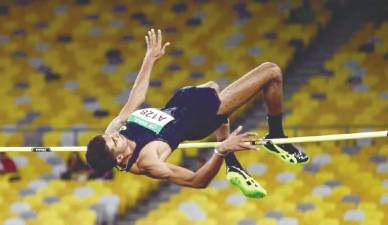 STANDING at 193cm, Johor boy Nauraj Singh Randhawa towers above mere mortals in more ways that one. This national high jumper and Olympian has been either creating or breaking records from the time he was representing his school in sports.

Nauraj has recently relocated to Leipzig, Germany to begin a new chapter in his life that not only includes his personal life (he has a fiancee there), but also his athletic career. He has started working with a German coach, and together they are getting him prepared for the Tokyo 2021 Olympic qualifiers.

He describes his family as a typical Indian (Punjabi) family that believes traditions passed down from ancestors are very important and meaningful.

Tell us about your family. Are they athletes too?

“My older sister played netball (she is 176cm in height) in high school, and my younger sister (185cm) threw the shot putt in school. That’s about it for their sports lives.

“Dad (198cm) played badminton in his younger days and was good at it, and Mum (172cm) was a hockey captain back in her school days.”

When did you switch to high jump, and why?

“I was nine when high jump was brought into my life by my school teacher. He saw potential in my lanky physical body that could allow me to excel in the sport. He trained me for high jump in school for a whole year without any competitions.

“When I was 10 years old, I competed for the first time in high jump and was breaking many records all over my zone and district level. One of those records still exists today.”

What other sport did you excel in?

“I played hockey for my district in school but didn’t pursue it further. I ran in 4x100m relays and individual 200m. Running 200m was the first sport I dominated before high jump, but as my focus shifted to the field event, other athletes began to emerge as faster sprinters.

“I loved football but wasn’t able to make the school team in high school. Now, I still play basketball occasionally, but I have slowed down on that because I suffered from a sprained ankle while playing a few years back.”

What was it like when you won the gold medal at the Sea Games in 2013 and repeated the feat in 2015?

“Winning is actually easy. Defending the title takes a lot more than what you see.

“In 2013, I was an underdog (a hungry one). In 2015, I suffered injuries and was under a lot of pressure. It was mostly the pressure of losing what I had. 2015 was a learning curve I needed, which has made me the person that I am today.”

You qualified for the Rio Olympics in 2016. What was that like, especially since you did it without a wild card?

“It was by far the most memorable day in my career. Bigger than the Olympics itself. I had my number one fan (my dad) in the stands rooting for me, and I actually walked into that meet with intentions of doing some great jumping.

“Qualifying gave me a feeling that I earned every right to be there at the Olympics, to have a meal in the dining hall, and to have every right to stand in the stadium where Usain Bolt won his last Olympic gold medal.”

You were in Malaysia during the MCO. How did you stay in shape or practice?

“Training-wise, nothing much could actually be done. Limited resources forced me to only do some small form of intensive workouts. I was warned by police officers on bikes for jogging outside my parents’ home in the housing estate!

“I knew my body could use some form of rest from all the impact taken by my joints (knees and ankles) so I looked at it as a form of maintaining some strength, while pushing myself towards some stamina.

“So I did lots of strength circuit workouts from my past experience of being coached by a Russian, a Chinese, a Cuban and an Australian coach. I mixed up exercises and made my own workout.”

How do you feel about your journey as an athlete to date?

“There’s so much learning that comes from the journey of being an athlete. I feel privileged to a life of such. Most people don’t get exposed to extreme experiences, and both physical and mental torments.

“It is worth it. Every reward has a price that needs to be paid, and I wouldn’t want to have my life be any other way than what it is today.”