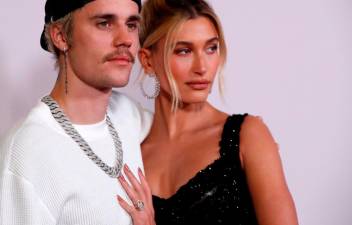 JUSTIN Bieber and his wife Hailey Baldwin are opening up in an intimate series for Facebook Watch in which they discuss their marriage, their problems and their lives together.

“The Biebers on Watch” launched on Monday with the first of 12 episodes shot by the couple in and around their Toronto home where they are currently under lockdown due to the coronavirus pandemic.

The first episode sees the couple taking a boat out onto a lake near where Bieber grew up and talking frankly about the challenges and rewards of being married.

“There’s a lot of things I need to work on. Forgiveness things, jealousy things, insecurities that I didn’t even realise I had until I chose to spend my life with you. Realised there were blind spots in my life that I didn’t realise I had,” Bieber told Baldwin.

The series is being shot on GoPro cameras, Facebook Watch said.

Bieber, 26, and Baldwin, 23, met in their early teens, attended the same church and started dating again seriously about two years ago. The Canadian singer and the model married privately in 2018 and held a second wedding for friends and family in September 2019.

The series follows a 10-part documentary on YouTube earlier this year where Bieber emerged from a long period out of the public eye to chronicle the making of his first album in four years, “Changes”.

Bieber shot to worldwide fame as a 13 year-old, got hooked on drugs, hit the headlines for a string of arrests and bad behavior, and abruptly pulled out of his “Purpose” world tour in 2017 citing the need for rest.

He has since spoken frankly of his struggles with drugs, depression and fame. – Reuters

By Kasey Moore Hell on Wheels – Picture: AMCAmong the many high profile departures from Netflix in December 2020 will be a lesser talked about...
Read more