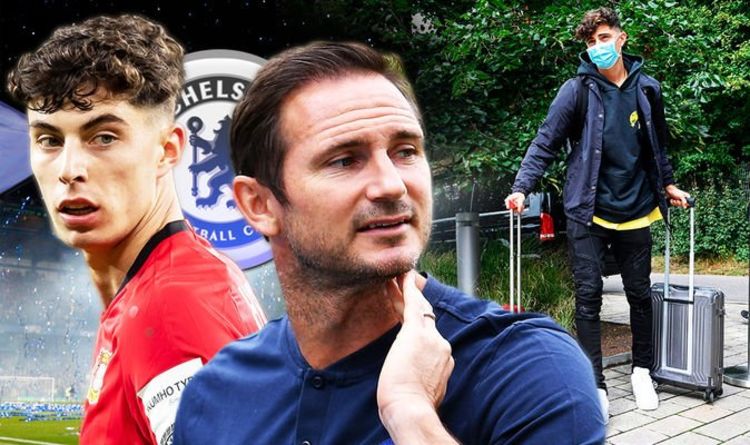 Kai Havertz has reportedly been granted permission to leave Germany’s training camp in Stuttgart to complete his move to Chelsea. The player is now set to undergo a medical and sign his contract before confirmation of his £90million switch from Bayer Leverkusen is confirmed.

Havertz is now heading for London where he will put the finishing touches on a move which will see him become Chelsea’s record signing.

The inital £72million deal, which could rise to £90m with add-ons, will surpass the £71m paid to Athletic Club in the summer of 2018 for goalkeeper Kepa Arrizabalaga.

The German international was on the bench for his country last night in the 1-1 draw with Spain in the Nations League.

It’s understood that Chelsea struck an agreement with the German national team to keep him on the bench for the clash to avoid the potential risk of injury.

The two clubs have been in talks over a deal since July but finally reached an agreement at the start of last week in regards to the structure of the deal.

There have been conflicting reports as to whether Havertz has actually undergone a medical with the Blues.

German reports had claimed Havertz’s passed his medical in London last weekend but Bayer Leverkusen have now confirmed that their star man is heading to England to complete all the final formalities ahead of a move.

Havertz is set to become Chelsea’s sixth summer signing. He will team up with Werner, Hakim Ziyech, Malang Sarr and Thiago Silva at Stamford Bridge. Youngster Xavier Mbuyamba has also been brought in by director Marina Granovskaia.

As a gift for succesful negotations, Chelsea are set to loan Bayer Leverkusen French centre-back Sarr following his arrival on a free transfer.

Frank Lampard’s spending is unlikely to stop there either and he still wants to bring in a new goalkeeper.

But first he may have to offload Arrizabalaga to raise funds. Rennes’ Edouard Mendy is an option while the club have also looked at Andre Onana and Gianluigi Donnarumma.

Sporting News When the Patriots got stuffed at the goal line down 35-30 with time expiring against the Seahawks on Sunday Night Football, not only...
Read more
Sports

But speaking ahead of Saturday's clash away at Brighton, Solskjaer refused to comment on speculation over potential incomings. He said: “As I’ve said so many...
Read more