Kardashians show to end after 14 years 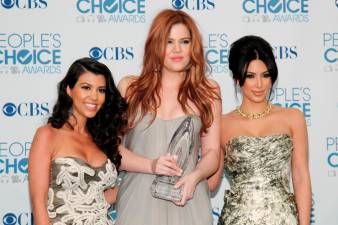 THE American television reality show that shot Kim Kardashian and her family to fame is ending in 2021 after 14 years, the E! network said on Sept 8.

Keeping Up with the Kardashians, which helped make Kim Kardashian and her siblings Kylie, Kendall, Khloe and Kourtney household names and launched their careers in the fashion and beauty business, will air its last season early next year, the network and the extended family said.

“It is with heavy hearts that we say goodbye to Keeping Up with the Kardashians. After what will be 14 years, 20 seasons, hundreds of episodes and several spin-off shows, we’ve decided as a family to end this very special journey,“ the family said on social media.

They gave no reasons for the decision, but E! said in a statement that it respected “the family’s decision to live their lives without our cameras.”

Keeping Up with the Kardashians made its debut in 2012 and spawned 12 spinoff series. Audiences have declined in recent years to under 1 million from about 4 million at the height of the show’s fame. E! is part of NBC Universal, a unit of Comcast Corp.

The show chronicled the personal and professional lives of the California family, including Kim Kardashian’s marriage to rapper Kanye West, an armed robbery in Paris, Khloe Kardashian’s split with basketball player Lamar Odom, and the transition of family patriarch Bruce Jenner to Caitlyn Jenner.

It helped Kim Kardashian launch a beauty and shapewear line, launched the modeling career of her half-sister Kendall Jenner, and helped promote a lip gloss business that turned half-sister Kylie Jenner into a billionaire at the age of 21.

“This show made us who we are and I will be forever in debt to everyone who played a role in shaping our careers and changing our lives forever,“ Kim Kardashian said in a posting to her 188 million Instagram followers.

Kim Kardashian’s life has recently taken a more serious turn with her decision to train as a lawyer and to lobby for criminal justice reform. – Reuters