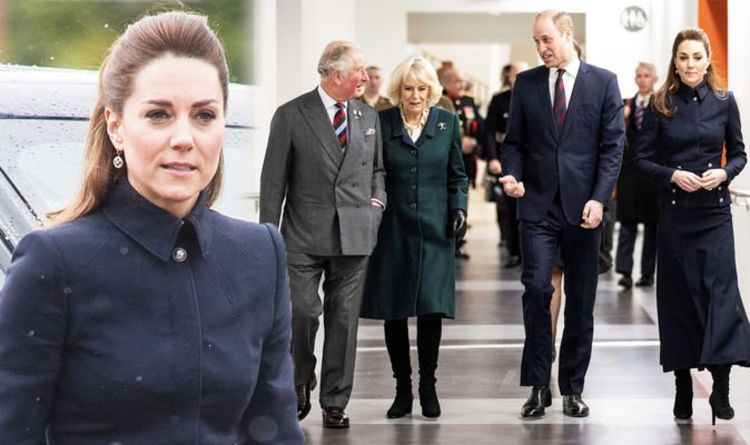 Although they appeared strong as a group, their body language showed some “pain”.

Kate Middleton and Prince William seem to have taken on more royal duties since the official step back of Meghan Markle and Prince Harry.

Today, the Duke and Duchess of Cambridge were joined by William’s father, Prince Charles, and his wife Camilla, Duchess of Cornwall.

As they stepped out together, the group showed solidarity, body language expert Judi James claimed.

She told Express.co.uk: “The smiles might have looked a little forced at times.

“However, the way this new royal dream team worked to register a public display of unity showed how keen the ‘firm’ is to be seen as strong, resilient and ongoing in the face of dramas, scandals and even the sad breakdown of Peter Philip’s marriage that was just the latest story to hit the headlines.

“It wouldn’t be an over-statement to suggest the future of the monarchy rests in these two couple’s hands and, with the Queen clearly keen to be reassured that her legacy is intact, we might expect more of this kind of jovial, relaxed and warm-looking outings in a bid to prove that it is.”

With many recent changes in the Royal Family, the group seemed determined to show some form of strength, Judi explained.

“Kate wore a military-style suit for the visit and it perfectly defined her current role of powerhouse in the royal firm,” she added.

“Whether she was engaging a rather tense and anxious-looking Camilla in conversation or laughing with her husband to make the group look a little more relaxed than they might do normally, Kate must now be seen as the bedrock of the royals in terms of positive PR.”

While there have been rumours about Prince William’s tense relationship with his father, the royals appeared keen to squash these.

The four made an effort to show of their fun sides and genuine close relationship, Judi suggested.

She said: “There have been rumours that William and his father haven’t always seen eye to eye but Kate looks as determined to pull the happy poses together as she was while the rumours were swirling about rifts between herself and Meghan and William and Harry.

“With Camilla walking back with Kate and William, Charles is left to perform some ‘King-in-waiting’ style high-status body language here, interspersed with enough chuckling to ensure he also reveals his warmer, fun side.”