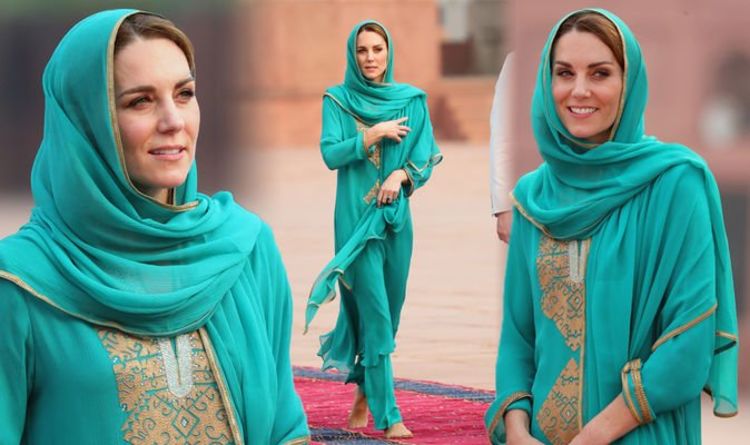 Kate Middleton looked stunning as she donned her second outfit of the day in Lahore in Pakistan. The royal wore a colourful number as she stepped out with Prince William to visit the Badshahi Mosque within the Walled City. The Duke and Duchess of Cambridge have been in Pakistan since Monday as part of a five day official royal tour. The Duchess opted for a bold teal and gold garment and marked her respects to the religious venue by covering her hair with a matching shawl.

Kate grabbed attention by wearing the colourful design which had long sleeves and an oversized fit.

Royal fans were quick to comment on Kate’s traditional look and headed to Twitter to give their approval.

“Kate Middleton in balochi/Sindhi touch dress, and I’m in love with her,” another added.

The sheer garment had a gold print down the front which was complemented by gold stitching on the sleeves.

It had a ruffled asymmetric hemline which cut off just below the knees, showing off a pair of teal trousers underneath.

Kate embraced tradition by leaving her shoes behind and she was spotted walking with bare feet.

Her brown locks were tucked into a teal and gold shawl and the piece was wrapped around her head.

She walked with Prince William and the royal couple were seen speaking with officials at the Mosque.

The Duke and Duchess first arrived in Lahore earlier today where they were greeted by officials at the airport.

Kate opted for a chic look and covered up in a crisp white kurta and trouser set.

She finished the outfit with a pair of suede nude high heel shoes and matching envelope clutch bag.

Arriving with her hair down, Kate soon pulled it back into a low ponytail as she enjoyed a game of cricket.

Showing off her bold and colourful wardrobe, the stylish royal began the second day of the royal tour wearing a blue kurta.

The royal blue number had a white floral pattern down the front and Kate kept her modesty with a pair of trousers underneath.