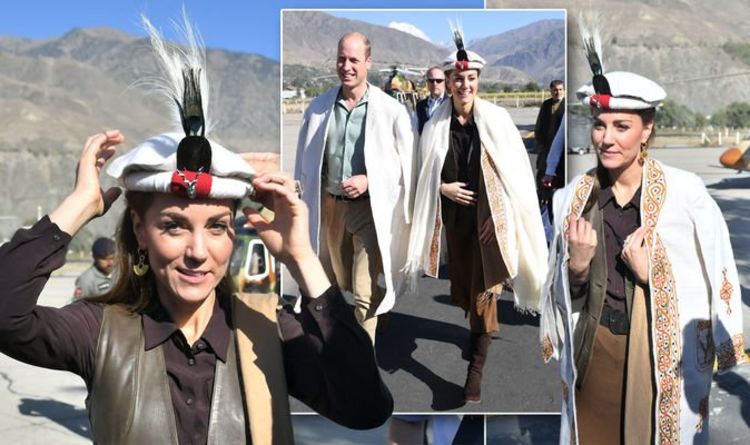 Kate Middleton, the Duchess of Cambridge, and Prince William have stepped out on day three of their official royal tour of Pakistan. During the trip, the Duchess has respected the traditions of the country by covering up in a collection of modest designs. Today, she was gifted a Chitrali hat, which is an item traditional in that region of Pakistan. The hat, which is white and red, was adorned with peacock feathers, as is custom.

The mum-of-three was also given an embroidered coat and shawl, both of which she wore over her outfit.

Today Kate chose a more Western style of outfit than she has so far during her trip, opting for a brown shirt and cropped wide-legged trousers.

She teamed these with a brown leather waistcoat and brown suede knee high boots.

A wide suede brown belt nipped her in at the waist and added definition.

Completing the look, Kate opted for a pair of gold drop earrings. Her engagement ring added the final sparkle.

Kate and William are not the first royals to undertake a royal tour of Pakistan, and Princess Diana visited the region in 1991.

The couple followed in her footsteps today, as she also visited the Chitrali region during her visit and wore a traditional hat.

Today, Himalayan dignitaries presented a book full of photographs of Diana wearing the same feathered cap and cloak of the Chitral Scouts William and Kate had on to the couple.

Prince William, who received the present, was pleasantly surprised by the kind thought. He said: “That’s very kind, thank you very much.”

He then noticed Diana had worn the same item as himself and Kate, and exclaimed: “She is wearing the same hat! Fantastic.”