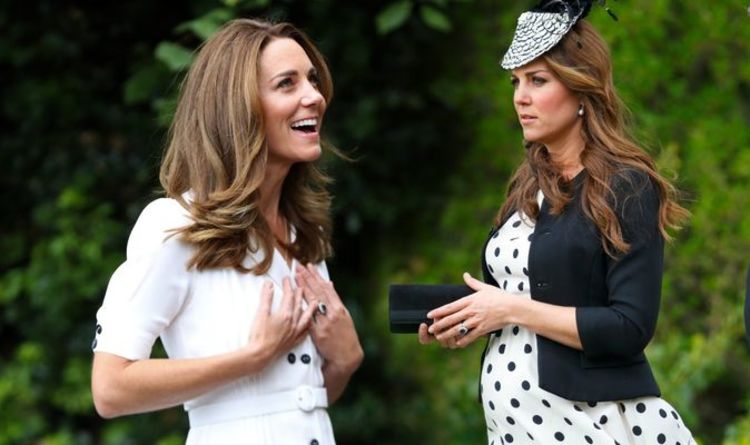 She told host Giovanna Fletcher: “[It was] utterly rotten.

“I was really sick. I wasn’t eating the things I should be eating and yet the body was still able to take all the goodness from my body and to grow new life, which I think is fascinating.

“William didn’t feel he could do much to help and it’s hard to see you’re suffering without actually being able to do anything about it.”

The Duchess even revealed the severe illness caused her to anticipate giving birth, someone most women are worried about.

“Because it had been so bad during pregnancy, I actually really quite liked labour… Because actually it was an event that I knew there was going to be an ending to!” she said.

“But I know some people have really, really difficult times, so it’s not for everybody.

Sweetly, the royal described the birth of her first child George as: “Amazing, amazing.”

She went on: “How can the human body do that? It is utterly extraordinary, actually. And he was very sweet.

“And also sort of relieved that he was a happy, healthy boy.”

Of meeting the press outside the maternity ward she told the podcast listeners: “I…oh my gosh, I can’t remember. Everything goes in a bit of a blur.

“I think, yeah I did stay in hospital overnight, I remember it was one of the hottest days and night with huge thunderstorms so I didn’t get a huge amount of sleep, but George did which was really great.”

“For the last four days, you up the calorie intake to 1,500 calories a day by consuming two sirtfood-rich meals and two green juices,...
Read more
Lifestyle

According to the latest whispers, this could be one of the biggest iPhone launches ever. Apple is widely-tipped to unveil four new models. Until...
Read more
Lifestyle

Mr Johnson said: “With its impressive performance and safety features, it’s no surprise that the Tesla Model 3 has topped the list of the...
Read more
Lifestyle

YouTube astrologer Gregory Scott thinks you cannot be particularly interested in other people’s point of view this Sunday. He said: "Scorpio is primarily concerned with...
Read more