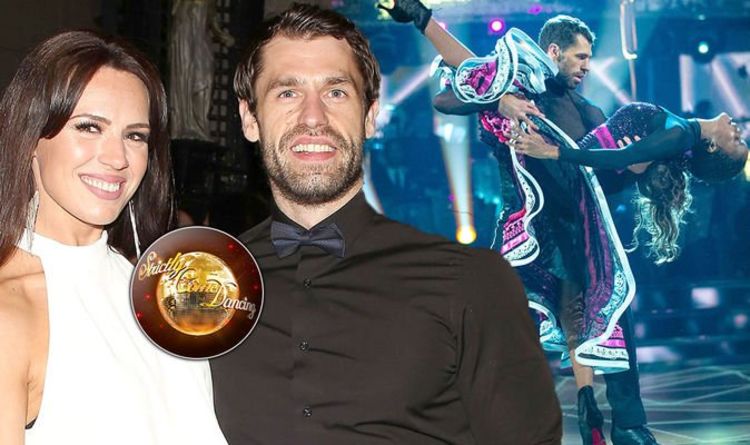 Kelvin Fletcher was confirmed to be in the Strictly Come Dancing 2019 final last weekend, where he will dance with professional parter Oti Mabuse. The former Emmerdale actor’s wife, Elizabeth Marsland, has spoken of their sexy performances as he prepares to take to the dance floor for the last time.

In a joint interview, the 35-year-old and his spouse of four years spoke of his time in the BBC show and his "sensual hip action”.

The ex soap star’s other half said she is not bothered by his raunchy offerings, admitting she “used” to it.

Kelvin’s dances have often left the Strictly judges flustered and last Saturday’s offerings were no different.

Elizabeth has told Hello! magazine: "It doesn't bother me. I'm used to seeing him kiss Britain's sexiest females on Emmerdale.

"I know the biggest part of a dance is the story and making it believable. I understand it's a performance."

Kelvin played Andy Sugden for 20 years in the long-running ITV drama, and has known his now wife since he was eight-years-old.

Elizabeth added: "I can imagine it's difficult for people who aren't in this industry."

The couple wed in a secret ceremony on November 28, 2015, with their daughter Marnie being born the following August.

It comes just hours after Strictly fans said goodbye to comedian Chris Ramsey, who became the latest celebrity to depart in the dramatic semi-final.

The 33-year-old and partner Karen Hauer went up against Karim Zeroual and Amy Dowden in a shock dance-off.

The panel unanimously chose the latter, with Craig Revel Horwood saying: “Well I loved the story telling, particularly in both dances and I’m going to vote on the technique and for me technically the best couple were Karim and Amy.”

Bruno Tonioli stated: “With no disrespect, both were highly entertaining. I love you both, thank you for three months of great dancing and great entertainment. I have to choose the best dancer – Karim.”

ByMariah Cooper Facing their fears … or not. Celebrities might seem confident in the public eye, but when it comes to being afraid, they’re just...
Read more