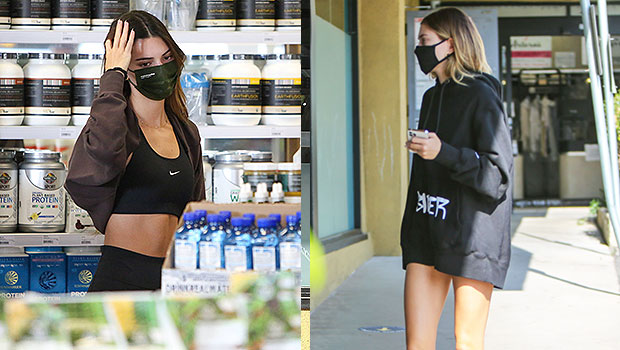 Kendall Jenner and Hailey Baldwin were spotted looking gorgeous in casual black workout clothing when they stepped out to go to a juice bar together after a session at the gym.

Kendall Jenner, 25, and Hailey Baldwin, 23, proved their friendship is going strong when they were seen on a juice run at Earth Bar in West Hollywood, CA after taking in a workout together on Nov. 7. The stunning models were matching in black casual outfits, with Kendall in a sports bra under a dark brown cropped sweater and black leggings, and Hailey in a black oversized hoodie that had “Bieber” written on it in white. They also both wore face masks and Kendall topped off her look with a pair of sunglasses.

Kendall and Hailey’s latest gym outing comes after they spent some time in Palms Springs to celebrate Kendall’s 25th birthday last week. Some of the Keeping Up with the Kardashians star’s family and other friends joined them such as Kylie Jenner, 23, Kylie’s two-year-old daughter Stormi Webster, and Justine Skye. They all spent time at Kendall’s mom Kris Jenner‘s house and a source EXCLUSIVELY told HollywoodLife that the reason they went to the private area was because they all wanted to enjoy some “quiet time” after a busy Halloween weekend.

“Kendall is in Palm Springs right now at Kris’ house in La Quinta. Her family, along with a few of her best friends including Hailey and Justine headed there because they wanted to spend the actual day of Kendall’s birthday together,” the source said at the time. “Kris’ Palm Springs home is kind of like the family’s safe haven to get away from it all because it’s so peaceful and serene there, and they can escape their hectic day-to-day lives in L.A.

“It was the perfect destination to go after celebrating Halloween and her birthday party, and Kim [Kardashian]’s 40th birthday trip because they could just focus on family time and not be disturbed with the outside world,” the source added.

Kendall and Hailey’s juice run and birthday celebration aren’t the only times they’ve hung out this year. The young beauties are known for being close friends and Hailey and her husband Justin Bieber, 26, hang out with the KarJenners on a regular basis. On Sept. 7, they were also seen outside of a Whole Foods and before that, they were vacationing in Idaho.