by Newslanes 1 week ago1 week ago
132views 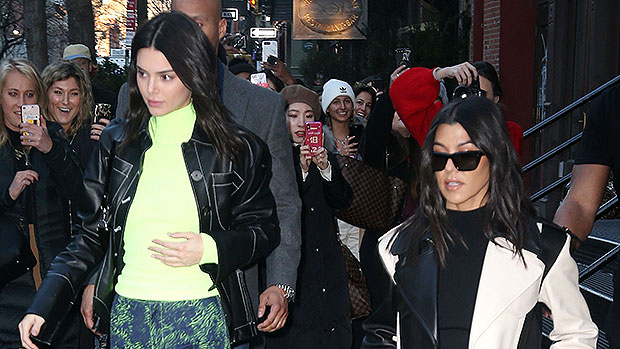 Kim Kardashian’s sisters posted back-to-back posts on their Instagram stories! Both Kendall and Kourtney slayed in their latest posts as Kim’s marriage appears to be on the brink.

The Kardashian sisters are all gorgeous and they certainly know how to take a photo! Both Kendall Jenner, 25, and Kourtney Kardashian, 41, took their Instagram stories to post sexy snaps on Wednesday, Jan. 6. Kendall rocked a blue t-shirt and sweat short set from streetwear brand Cherry Los Angeles. “Best,” the Stuart Weitzman model captioned the selfie video, showing off her toned tummy. The brunette kept her hair center parted and straight as she held her phone and filmed. Kylie Jenner, 23, is also a fan of Cherry Los Angeles — recently sporting their “City of Champions” crew on Dec. 13.

Kourtney also posted a super flirty photo to her own account, promoting her lifestyle site Poosh‘s January picks. The mom of Mason, 11, Penelope, 7, and Reign, 5, left little to the imagination in a deep cut plunging black mini dress. The artsy photo was taken through a window pane as Kourt candidly gazed, staying cozy in an on-trend black puffer jacket. While both didn’t tag a location, the KarJenner clan have been vacationing in an Aspen, Colorado mansion costing $ 450K a month.

The posts come amidst sister Kim Kardashian‘s reported marriage drama with Kanye West. HollywoodLife has previously reported that the 40-year-old SKIMS founder and 43-year-old Yeezy designer have been living “separate lives” as she remains at their Calabasas home while Kanye lives on his Wyoming ranch. “Kim’s been doing everything possible to save her marriage, they’ve been having trouble, as everyone knows, but she just hasn’t wanted to give up,” a source EXCLUSIVELY told us. “They’ve been doing counseling, but they’ve really been spending very little time together. They pretty much just come together for the kids now,” they added.

Kim and Kanye tied the knot in a lavish Florence ceremony in 2014, and are parents to four adorable kids together: daughters North, 7, and Chicago, 2, and sons Saint, 4, and Psalm, 1. Reports of the split come after Kanye’s controversial presidential run, during which he publicly revealed he and Kim had considered aborting their eldest child North. “It’s been very hard on Kim trying to hold it all together, because more than anything she never wanted her kids to have to go through a divorce,” our source also said. “She still doesn’t want that, it’s very hard for her to accept. But, if she does in fact go ahead and file for divorce the one thing she won’t do is put her kids in the middle.”