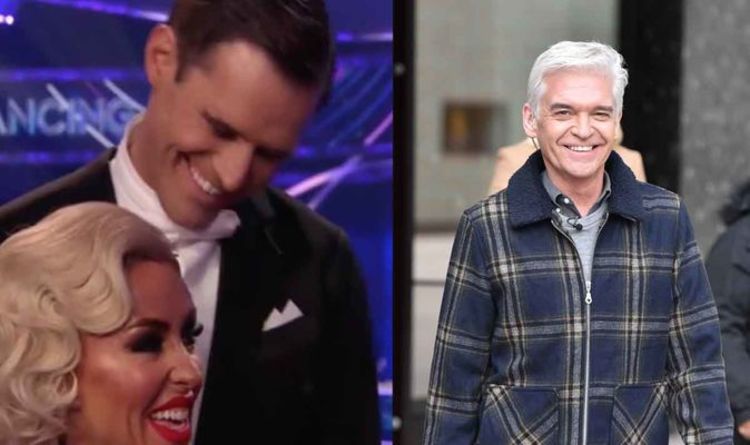 Kevin Kilbane, who is engaged to professional skater, Brianne Delcourt was caught out after the Dancing on Ice host, Phillip Schofield asked him how their wedding plans were coming along. The couple have set their eyes on marrying in Ireland.

Phillip asked Kevin and Brianne: “So, how are the wedding plans going?”

Kevin then responded: “It’s baby steps isn’t it?” while he looked down at Brianne.

Phil then proceeded to joke, and added to tease the crowd: “Babies?”, leaving all the stars to cheer and laugh along.

While the former contestants were gathered around Holly and Phil, Phil then directly said to the camera: “I can’t wait to see this online.”

Although the cast found Phillip’s joke entertaining, viewers of the grand finale expressed their honest opinions of the joke.

One wrote on Twitter: “The digs at Kevin and Brianne are getting so old Phillip.”

Another was not pleased either as they said: “Holly and Phil need to give it a rest taking the p*** out of Kevin and Brianne’s relationship, they’ve found happiness so just leave them be.”

Joe Swash and Alex Schauman won the series of Dancing on Ice.

Another expressed that they were pleased with the result as they confessed: “Wow never saw that one coming, well done Joe Swash, well deserved.”

“THEY DID IT!! TOOK THE TROPHY! they were incredible and deserved the win! So happy for both of them my favourite though the whole series! #DancingOnIce”, another added.