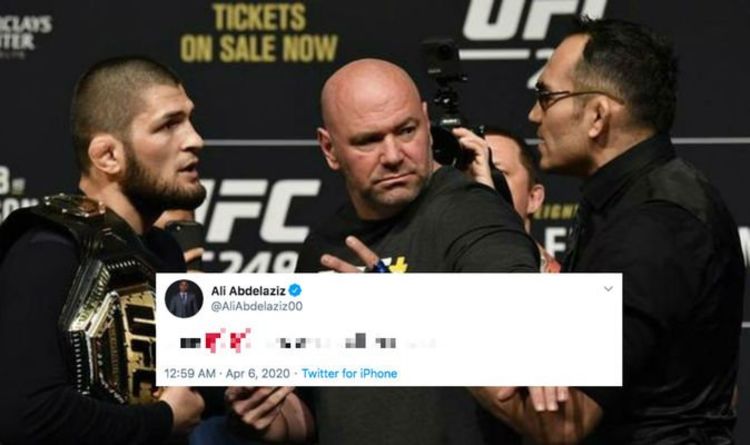 Khabib Nuragomedov’s manager Ali Abdelaziz has seemingly hinted the UFC lightweight champion’s showdown with Tony Ferguson will go ahead. The Russian’s long-awaited meeting with Ferguson was scheduled to headline UFC 249 in Brooklyn a week on Saturday.

The card, however, suffered a monumental blow last month due to the coronavirus outbreak, which prompted the state of New York to implement a ban on mass gatherings.

Nurmagomedov’s clash with Ferguson, which has been in the making for nearly five years, suffered another huge blow last Monday when Russia introduced a blanket travel ban to curb the spread of COVID-19.

‘The Eagle’ seemingly withdrew from the card last Wednesday, though less than 24 hours later he insisted he’d make arrangements to leave Russia if the UFC informed him of the new location for the event.

Nurmagomedov’s participation on the card, which has the potential to be one of the biggest of the year, is still very much in doubt.

JUST IN: Dana White appears to confirm new location for UFC 249 has been found

“The card is happening but @TeamKhabib is out. I will announce the entire card tomorrow.”

Nurmagomedov and Ferguson, 31 and 36 respectively, have been scheduled to face one another a staggering five times.

A myriad of injuries and complications from a difficult weight cut have repeatedly laid waste to their meeting, which could very well be cancelled by a global pandemic.

Nurmagomedov returned to his homeland of Russia in mid-March after restrictions in California forced American Kickboxing Academy in San Jose to close down and he was denied entry to the UAE, where the UFC told him his clash with Ferguson would likely take place.

And upon learning of the news that Nurmagomedov might be stuck in his native Dagestan, Ferguson accused the 155lb king of ducking him.

In an interview with ESPN, the Ultimate Fighter season 13 winner said: “Obviously I was very upset, I feel more for everybody else that’s actually going through some hard times