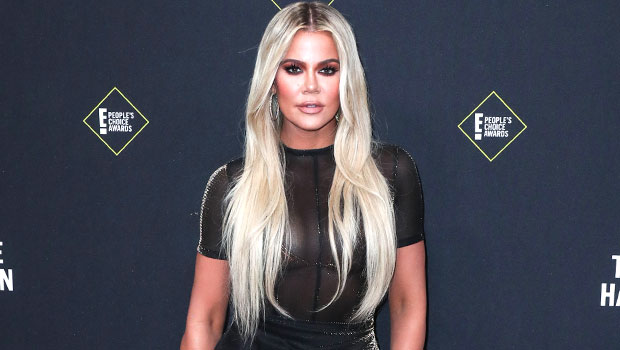 Khloe Kardashian sure loves her Instagram filters. She used one to give herself light green eyes that even she admitted made her look ‘scary’ and fans sure agreed.

Khloe Kardashian‘s seemingly changing face has been the subject of so much talk among fans. While her visage appeared to not be altered in a new Nov. 12 Instagram stories video while she promoted a collagen creamer, the 36-year-old freaked herself out by changing her eye color. She looked like her usual self at the start of the video, showing off her beautiful face by pulling her hair back into a tight bun in the back of her head.

Koko used neutral hues on her eyes and lips, making her look refreshing and so naturally pretty. But after giving an unboxing tour of the Dose & Co. creamer products, she brought the camera back to her face where she included a filter to make her eyes a really light green. It even gave Khloe pause, as she stopped talking about the product to say, “Wow, these eyes are scary. Scary from every angle,” as she rotated the camera to see if it adjusted the color at all.

Fans agreed that the filter made her look pretty frightening. User @tala.shu asked, “What is the point of using some of these Instagram filters? They make people look so scary!” while @mmalik.93 wrote, “I legit screamed. This filter does not suit you @khloekardashian.” Fan @goodvibes.gold claimed that, “She look like IT. So scary,” referring to the horror film villain Pennywise while @emmamartire78 noted, “Bleh its horrible” of Khloe’s latest filter.

On the upside, the rest of Khloe’s face looked more like herself than it has in some recent photos she’s shared. In a series of Sept. 4 IG pictures to show off her new blonde dye job, her nose appeared thinner and her jawline more sleek. It caused fans to write in the comments, “What did you do on your face?” while another said, “Your [sic] changing your face too much @khloekardashian it’s getting ‘not’ natural.” Another wrote, “Please stop doing things to your face. Please.”

After Khloe was done promoting her collagen creamer, she gave herself props for how she displayed and discussed the products. “I feel like I did a really good job at unboxing. It’s not my forte. But I’m proud of myself, I did a good job,” the 36-year-old noted. She also warned sister Kylie Jenner, 23, that she was going to give her a run at unboxing skills, as Ky is such a pro at showing off her newest Kylie Skin and Cosmetics products within their marketing materials.

After Khloe was done with her marketing session, she shared a series of inspirational quotes. The mother of one posted one that read, “You glow different when you’re not hating, hurting, bitter, or messy.” She also added another that said “I cannot express this enough, you have no idea what other people carry with them everyday. You have no idea what someone’s life is like. Don’t create more pain & stress to others. Be kind. Be genuine. Stop being so mean to people to fulfill whatever it is you don’t like about yourself.” After only messing with her eyes when it came to her latest filter experiment, hopefully fans won’t be so mean when Khloe uses filters to change up her appearance.