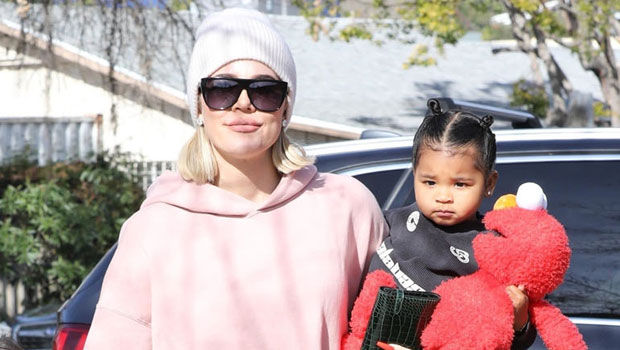 Like mother, like daughter! Khloe and True looked absolutely adorable in this new selfie as they lounged around at home.

Khloe Kardashian, 36, and True Thompson, 2, are the cutest mother-daughter duo ever. The Keeping Up With The Kardashians star shared a sweet selfie of the pair to her Instagram story on Nov. 7, twinning with their curly hair! True sported her gorgeous natural curls down while Khloe swapped out her usually straight locks for a more textured look.

The two appeared to be spending a cozy day in at home, as Khloe sported a gray sweatsuit from her Good American line. The boyfriend-style crewneck sported a crab motif for her zodiac sign Cancer, which currently retails online for $ 89. The item also features a large crab image on the back, along with the words “Cancer.” She paired the top with the matching boyfriend sweatpants, which are $ 75. The loungewear collection just recently dropped, and Khloe has been avidly promoting it on social media — even posing with a Range Rover just like sister Kim Kardashian, 40.

True looked so sweet in a cotton blue dress with a ruffled neck and sleeves. The dress also appeared to feature a ballerina and leaf print. Barefoot True was so cute was she stood over her mom’s leg for the cuddly moment, flashing her ear-to-ear grin for the camera! The pair appeared to be hanging out in Khloe’s expansive walk-in closet, as several Hermès Birkin bags (in hot pink and a rare so-black) could be spotted behind them, along with several Louis Vuitton logo trunks.

The cute post comes hot off of True’s parents Khloe and ex Tristan Thompson, 29, spending time together in quarantine! The pair celebrated True’s 2nd birthday together back in April, and shared more of their interactions on Keeping Up With The Kardashians. “I’m just getting lonely and bored and I just need someone to keep me company,” the 36-year-old could be heard saying in the trailer for the latest episode. She hilariously — as only Khloe would — even turned her neck pillow into a new BFF: Quarantina!

Later, she revealed her creation — which rocked a chic pair of sunglasses — to Tristan over FaceTime. “Oh lord. If you ever need a friend to talk to, I’ll stand outside your window downstairs,” he offered, perplexed. “You know back in the day when guys would throw rocks at girls’ windows to talk to them? I could always do that. Take it back to the early ’90s!” he added.

Later, Khloe revealed she was “thankful” for Tristan’s support with their daughter. “I’m so thankful that Tristan’s been here to help me take care of True, and then he’ll make me some food and leave it outside my door,” she confessed. How sweet!