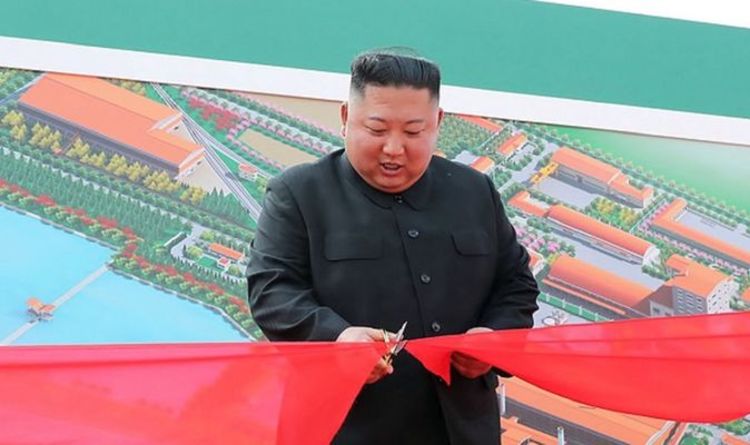 The massive portraits of Kim Il-sung and Kim Jong-il – Kim’s grandfather and father respectively – were reported by the Seoul-based, US-backed NK News website yesterday. Additionally, journalist Roy Calley, whose book, Look With Your Eyes and Tell the World, chronicles his numerous trips to the Hermit State as a tourist, said it was his understanding a statue of Kim Jong-il had also been removed.

He told Express.co.uk: “The last time that happened was when the place was being renovated following the death of the Dear Leader.

“The fact that portraits have been removed is very interesting.

“Kim Jong-un can’t have any statues or portraits unless he’s dead.

“The square is huge (think Beijing) so I can’t see why they’d be enlarging it.

“I’m guessing (and only that) they are preparing to add a third statue and portrait, but who knows?”

The portrait area the square, which is located in the country’s capital, has not been altered since 2012, the year after Kim’s father died and was replaced by his son.

The outlet also claimed the western side of the square was closed off to traffic.

He said: “Maybe I’m just being cynical but it does not look right to me.

“There is no way of telling when this picture was taken.

“This is just another factory in Pyong Yang and it’s a really odd picture to release all of a sudden.

“There is simply no way to date it and the thing is, in the normal course of events, every day there is a picture released of the Supreme Leader opening something.”

Nevertheless, Mr Calley added: “They have history with this kind of thing. He went missing before, for 40 days, and when he returned he was walking with a cane because of an operation.”

During the clip, Kim, who appears noticeably underweight, is also pictured smoking and Mr Calley said: “The thing is he is not a fit human being whatever way you look at it.”

If Kim Jong-un was to have died, his sister, Kim Yo-jong, is regarded as a possible successor – although her gender may make this difficult.

In a report published by the 38 North website, analysts Chris Steinitz, Ken Gause and Elizabeth Yang said: “The systematic rise and positioning of Kim Yo-jong signals the development of a continuity of governance plan, although the details of this plan remain unclear.