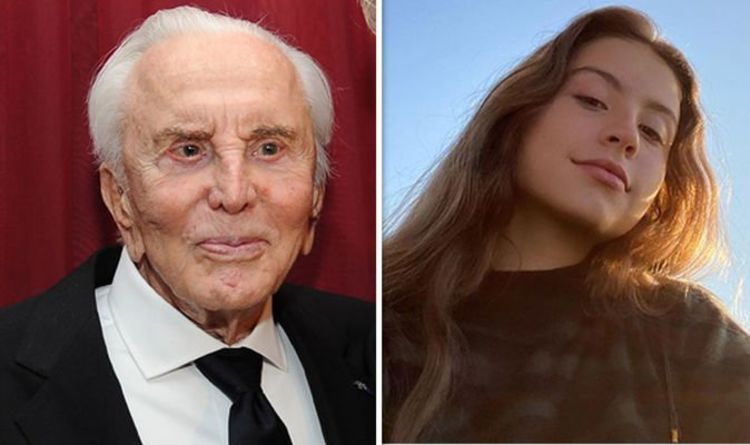 Actor Kirk Douglas has been laid to rest in a private funeral service attended by his closest friends and family.

It comes just hours after Michael Douglas’ and Catherine Zeta-Jones daughter, Carys Douglas, 16, took to Instagram and shared an emotional tribute on the picture-sharing site where she described Kirk Douglas as the “greatest gift” in life.

The funeral was held at Westwood Memorial in Los Angeles on Friday, two days after Kirk Douglas died at his home at the age of 103.

Outside the cemetery, the grieving family arrived to pay their respects, along with select guests including director Steven Spielberg.

In view of her 114,000 followers, Carys posted a lengthy statement which she accompanied with a recent photo of her grandfather.

Catherine Zeta-Jones’ daughter, wrote: “My Pappy was and forever will be my inspiration, my biggest supporter and the best grandpa in the world.

“I remember I would send him videos of me from my dance competitions and he would watch them on repeat.”

She continued: “He would always ask me ‘Carys, when are we going to dance together?’ This is how he was with our entire family, always ready to hear what new shows we were in, what sports we were playing, what new songs I was singing.”

Carys admitted that although her grandfather was “adored by millions” she knows him as her “Pappy” who she affectionately called him throughout her life.

She said: “He was, and still is a tremendous inspiration to the world through not only his incredible acting career, but his philanthropy and generosity that moved mountains.

“Although he was adored by millions, to me he was my Pappy, my superhero. He came from nothing yet, through his drive and determination, made a name for himself.”

Carys added: “He joined our family together and lived an incredible long life.

His lengthy caption read: “It is with tremendous sadness that my brothers and I announce that Kirk Douglas left us today at the age of 103.

“To the world he was a legend, an actor from the golden age of movies who lived well into his golden years, a humanitarian whose commitment to justice and the causes he believed in set a standard for all of us to aspire to.

“But to me and my brothers Joel and Peter he was simply Dad, to Catherine, a wonderful father-in-law, to his grandchildren and great grandchild their loving grandfather, and to his wife Anne, a wonderful husband.”