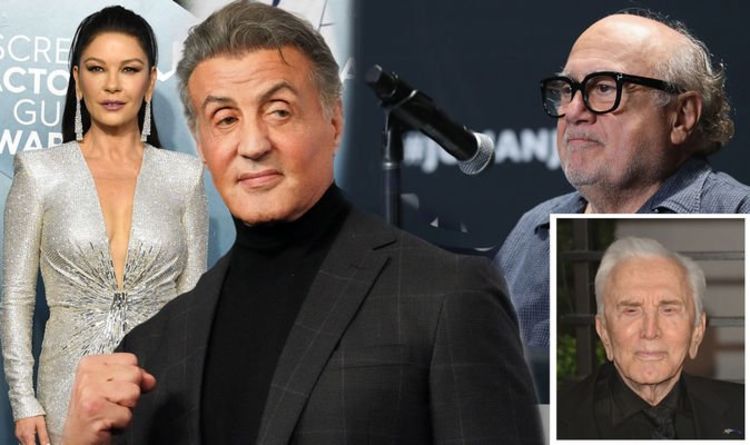 On Wednesday, news broke that Hollywood legend Kirk Douglas, had died aged 103. His Oscar winning actor son Michael Douglas, confirmed his passing on Instagram and he has been widley remembered by fans acorss the world.

He is known for breaking the Hollywood blacklist and starring in screenwriter Dalton Trumbo’s epic Spartacus movie, celerities and fans alike have followed suit and paid moving tributes to the Hollywood icon.

And, as more hear about the news of his tragic passing, social media is littered with memorable quotes and pictures, honouring the late icon.

Michael’s wife Catherine Zeta-Jones, posted a black and white photo showing her giving her famous father-in-law a kiss on the cheek, shortly after her husband’s touching post.

The Welsh actress wrote: “To my darling Kirk, I shall love you for the rest of my life. I miss you already. Sleep tight.”

US actor Sylvester Stallone shared a poster from Kirk’s 1949 film Champion, in which he played a boxer.

The Rocky franchise star wrote on Instagram: “KIRK DOUGLAS!!! The last great giant of my cinema heroes has passed on to Infinite glory. Amazing artist! The likes of which we will never ever see again!”

He was followed by Danny DeVito, who took to Twitter to share his shock at the news.

“Kirk Douglas. The inspirational Scalawag. 103 years on this earth. That’s got a nice ring to it! Great hanging with you man.”

Film producer Steven Spielberg, who presented Douglas with an honorary Oscar at the Academy Awards in 1996, also mourned his passing.

In a statement, he remembered his friend: “Kirk retained his movie star charisma right to the end of his wonderful life and I’m honoured to have been a small part of his last 45 years.”

He continued: “I will miss his handwritten notes, letters and fatherly advice, and his wisdom and courage – even beyond such a breathtaking body of work – are enough to inspire me for the rest of mine.”

Star Trek’s George Takei was also among the first to express his sorrow.

Taking to Twitter, he wrote: “Legendary actor Kirk Douglas has passed on today at the age of 103.

“An Academy Award winning actor and recipient of the Presidential Medal of Freedom, Douglas was a champion for many just causes and lived a long and storied life. He was adored and beloved, and he shall be missed.”

William Shatner posted his condolences after hearing the news: “Condolences to the family of Kirk Douglas.

“What an incredible icon he was in this industry!”

Michael Douglas broke the news of his father’s passing and paid emotional tribute to him on Instagram, saying he was “proud” to be his son.

He ended his honorary post with a eye-watering statement: “Dad – I love you so much and I am so proud to be your son. #KirkDouglas.”