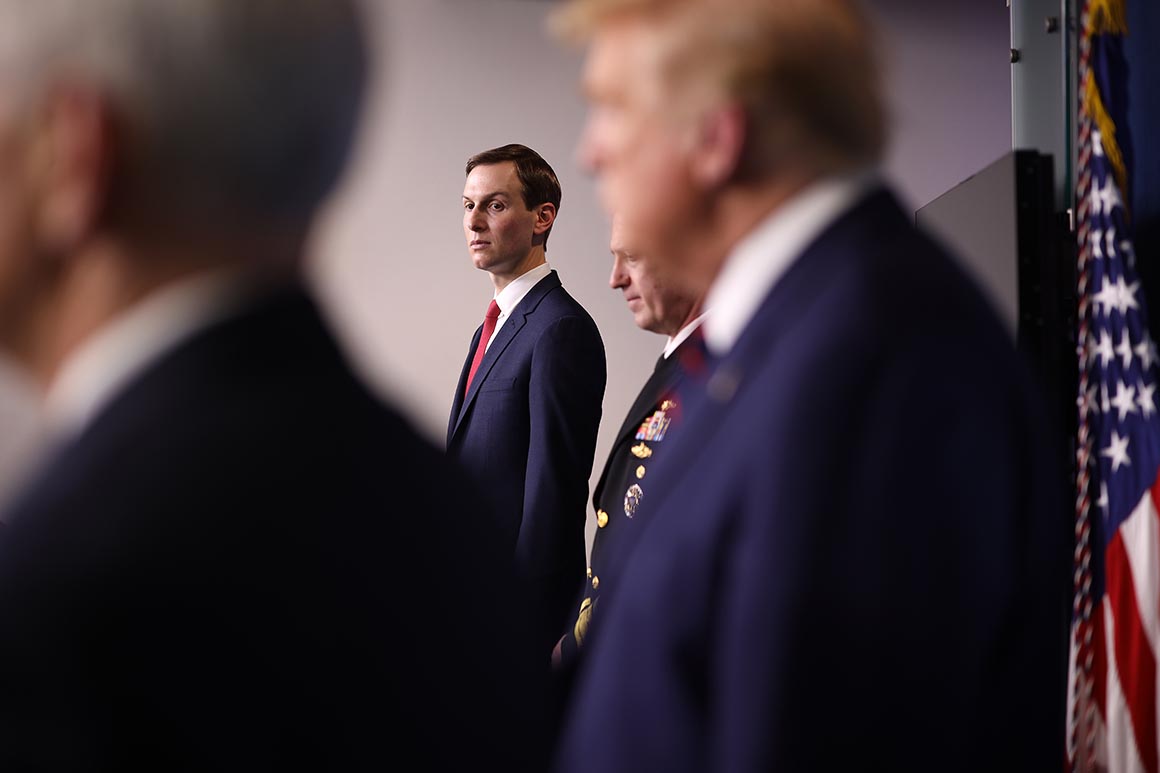 White House senior adviser Jared Kushner’s task force has reached out to a range of health technology companies about creating a national coronavirus surveillance system to give the government a near real-time view of where patients are seeking treatment and for what, and whether hospitals can accommodate them, according to four people with knowledge of the discussions.

The proposed national network could help determine which areas of the country can safely relax social-distancing rules and which should remain vigilant. But it would also represent a significant expansion of government use of individual patient data, forcing a new reckoning over privacy limits amid a national crisis.

Health privacy laws already grant broad exceptions for national security purposes. But the prospect of compiling a national database of potentially sensitive health information has prompted concerns about its impact on civil liberties well after the coronavirus threat recedes, with some critics comparing it to the Patriot Act enacted after the 9/11 attacks.

Already, the Trump administration has sought to ease data-sharing rules and assure health data companies they won’t be penalized for sharing information with state and federal officials — a move driven in part by Kushner’s push to assemble the national network, according to an individual with knowledge of the decision.

“This is a genuine crisis — we have to work through it and do our best to protect people’s health,” said Jessica Rich, a former director of the Federal Trade Commission’s consumer protection bureau. “But doing that doesn’t mean we have to destroy privacy.”

Currently, the federal government plays only a limited role in handling health information, with its access restricted by various privacy laws and in many cases reliant on voluntary data-sharing agreements with individual states.

The project — based on interviews with seven tech executives, government officials and other people familiar with its contours — would draw on detailed information collected from multiple private-sector databases. It would allow federal officials to continuously track elements like hospitals’ bed availability and the flow of patients into specific emergency rooms across the country — thereby enabling the government to rush resources to parts of the country before they’re hit by a surge of coronavirus cases.

“It allows you to be much more targeted and precise in how you engage,” said one person involved in the discussions. “They need data to make the policy decisions, and so that’s what we and others now have been asked to do.”

The White House declined to comment in response to detailed inquiries on Tuesday, but spokesman Avi Berkowitz said in a late Tuesday night statement after this article was published: "This story makes no sense and is completely false. The White House gets many unsolicited random proposals on a variety of topics, but Jared has no knowledge of this proposal or the people mentioned in this article who may have submitted it."

The creation of a national coronavirus database could help the nation get out in front of the fast-spreading virus, which officials anticipate will strain the health care systems of nearly every major city over the next few months and threaten to recur in pockets of the nation for some time after that.

Yet concerns about data sharing and patient privacy aren’t the only obstacles to the plan — which was described by people familiar with it as one of a series of out-of-the-box initiatives sought by Kushner’s team. That team is composed of a range of federal officials, friends and leaders from the private sector seeking to promote innovative responses to the coronavirus crisis.

The notion of a national surveillance network has also faced resistance internally from some health officials, who argue that the federal government should only go as far as setting broad standards for disease and resource tracking and leave it to individual states to stand up their own surveillance networks, according to two individuals with knowledge of the discussions.

Some public health experts, meanwhile, suggested that the administration might instead built out and reorient an existing surveillance system housed within the Centers for Disease Control and Prevention that aided the response to prior epidemics. The system, called the National Syndromic Surveillance Program, is a voluntary collaboration between the CDC and various state and local health departments that draws data from more than 4,000 health care facilities.

“In an emergency, what works best is scaling up existing robust systems, not trying to create a new system,” said former CDC Director Tom Frieden. “Use the systems you have.”

A Health and Human Services spokesperson said the department does not comment on internal deliberations.

Still, Kushner’s teams has remained enthusiastic about the idea of a national surveillance system, which they see as a way to better understand how the virus is progressing throughout the country and where resources are needed amid severe shortages of protective gear and medical supplies.

Kushner, along with other administration officials including President Donald Trump, have questioned in recent weeks whether governors actually need the equipment that they’re seeking from the federal government’s Strategic National Stockpile.

“The goal here is not to have ventilators sitting in a warehouse where you have another state where you have people who need them,” Kushner said during a press briefing last week. “So, what we’re trying to do is make informed, data-driven decisions.”

The administration’s slow ramp-up of testing, meanwhile, has made it difficult for states to trace the virus’ spread within their own borders – forcing hospitals to empty their facilities in anticipation of a wave of coronavirus patients that may not come for weeks. The testing that is being done has been hampered by backlogs in processing the results, public health experts say, meaning official case counts could be weeks behind the reality on the ground.

“What we’re seeing in the numbers is actually a two-to-three-week echo,” Jeremy Konyndyk, a senior policy fellow at the Center for Global Development and former Obama-era foreign aid official, said in late March. “We still mostly can’t see the enemy.”

That’s prompted a broad search within the administration for more up-to-date information, with Kushner’s team discussing the prospect of creating a surveillance network that draws together all the pertinent data.

One memo submitted by a group of health technology companies to Kushner, Vice President Mike Pence and Health Secretary Alex Azar and circulated widely within the administration, predicted it could supply the government with information on where and how many patients are seeking care across 80 percent of the U.S. “in short order.”

“No single organization in the United States today can currently meet this request,” said the March 22 memo signed by three health care firms – Collective Medical, PatientPing and Juvare — and submitted at the behest of administration officials, which was later obtained by POLITICO. “However, we believe that collectively we can.”

PatientPing declined to comment. Juvare CEO Robert Watson told POLITICO that the memo was submitted in response to White House interest, and that the company has spoken with officials across several federal agencies including FEMA, HHS and the CDC about its various emergency preparedness and data tools.

Collective Medical CEO Chris Klomp declined to confirm the memo’s existence or discuss its contents. But he told POLITICO that the company is already providing similar patient monitoring and hospital capacity services to some states for free, and has assembled a coalition of firms including PatientPing willing to aid the broader policy response.

Klomp emphasized that any work with federal or state governments to combat coronavirus would be done at no cost.

“We’re not trying to make money from this,” he said, adding that he worries officials are “flying partially blind” in managing the response. “We all need this problem to be resolved as quickly as possible, and it’s only going to happen if would-be competitors put down their swords, set aside politics, and work together.”

A separate memo submitted around the same time by health technology firm Audacious Inquiry proposed an alternative surveillance network that would use patient health records compiled by providers to monitor hospitals’ bed availability and their use of medical supplies.

“We believe a viable technical specification can be developed within weeks and that deployment can begin in less than 60 days to hospitals and health systems in priority regions,” said the memo sent to Kushner, Pence, Azar and other top health officials, and obtained by POLITICO.

Audacious Inquiry President Scott Afzal told POLITICO that the concept was put together in anticipation of a need to identify areas were the virus could re-emerge months for now, and that the company is also offering its services to state and federal officials for free.

“It’s a thing that’s going to be valuable months from now, not weeks from now,” he said of the surveillance network proposal.

Any national surveillance system would rely on patient data that’s been de-identified to protect people’s identities, three individuals involved in the discussions said.

Still, the prospect of sharing medical data with the administration would likely prompt close scrutiny from consumer privacy advocates, who warn the government’s response to prior crises has often opened the door to permanent erosions of privacy rights.

“We dealt with similar issues in 9/11,” said Rich, who added that there would need to be strict guardrails around how patients information is collected and used, and measures taken to ensure the data is protected. “One reason that the government doesn’t have all of this data is there’s a lot of concern about big brother maintaining large databases on every consumer on sensitive issues like health, and for good reason.”

Kushner in particular has attracted criticism over his involvement in prior planned policy changes designed to give patients greater control over their health records, yet that privacy hawks warn could grant tech companies access to a massive new trove of personal data.

“My biggest concern is that tech will emerge more powerful than it was,” said Burcu Kilic, who leads a digital right program at consumer advocacy organization Public Citizen. “When things get back to normal, do you think they’ll want to regulate them?”

Tech companies, in the meantime, are pushing ahead on their own efforts ahead of — and in some cases in anticipation of – broader government action.

Both Facebook and Google have rolled out tools meant to help researchers track and predict the virus’ spread using its access to location data, while a slew of smaller health technology firms have sought partnerships with states seeking to create their own networks.

“People are trying to figure out the most important things to do now,” Audacious Inquiry’s Afzal said. “If you were to say to us and a couple of these other companies, ‘We need you to get on the phone right now and start thinking through what parts of the country you can cover and how to star routing [information] inbound,’ we could do that.”