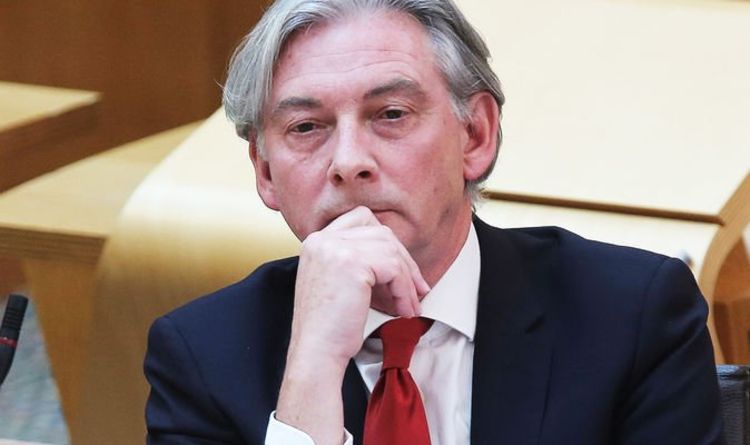 The Scottish Labour leader claimed he has been the subject of a series of attacks briefed anonymously by figures in the party that oppose his leadership. In his email to Scottish Labour members, he said he was telling them because they would be “as angry” as he was.

Mr Leonard fumed that the latest briefing to “sow division” between him and Labour leader Sir Keir Starmer came on Thursday as he was about to open the debate of no confidence in Scottish Education Secretary John Swinney.

He insisted that the focus should have been on the failings of the SNP amid the backlash over exam results.

“So what I will say next, I am telling you because I know you will be as angry as I am.

“At the very moment I was standing up to open the debate of no confidence in John Swinney, a journalist from the Murdoch press contacted Scottish Labour’s press office, having received a briefing attempting to sow division between me and UK Labour leader Sir Keir Starmer.

“This was a complete fabrication, which Keir’s office immediately told the journalist was ‘nonsense’. Nonetheless, the story was printed.

“Unfortunately, this was the latest episode in a coordinated series of attacks briefed anonymously by figures in Scottish Labour who opposed my leadership, and sought to undermine it, from the moment I was elected by the membership.

“The fact that they have chosen to attack my leadership at the very point when our focus should have been uniting on the failings of the SNP Government goes to show how damaging and misplaced their priorities are.”

Opening the debate, Mr Leonard said the backlash was “just the latest catastrophe in Mr Swinney’s tenure in education”.

The Scottish Labour leader said the motion was “not about retribution for what happened last week with the SQA shambles” but was instead “a time of reckoning for a long line of failures”.

He said the Scottish Government’s u-turn was “a victory for all those young people who refused to take this injustice lying down” and accused Mr Swinney of only reversing his decision when the motion of no confidence put his job at risk.

Demanding his resignation, Mr Leonard added: “John Swinney showed us that he had no confidence in Scotland’s school students and teachers.

“It is this Parliament’s duty to those school students and teachers to say that we have no confidence in him to sort out this mess which he has created.”

But First Minister Nicola Sturgeon described Mr Swinney as “one of the most decent and dedicated people in Scottish politics”, adding: “The Deputy First Minister is probably the most honourable individual I have ever known in my life.”

Responding for the Scottish Government, Ms Sturgeon insisted the “opportunistic” no-confidence motion was “not about principle, this is simply about politics”.

She said: “The last few days have been more difficult than they should ever have been for many young people in Scotland. I know that, and I am sorry, and so is John Swinney.

And the environmental pressure group has challenged the Government to use Brexit to take the steps necessary to protect the waters around the UK...
Read more
U.K.

As COVID-19 rules threaten Christmas, what will you miss? Answer and you could win £200

Express.co.uk is asking readers how they feel ahead of Christmas, not only about what they fear could be scrapped, but how they feel about...
Read more
U.K.

The London Mayor and the Prime Minister discussed the coronavirus situation in the capital. A spokesman for Mr Khan said: "Sadiq had a constructive...
Read more
U.K.

Mr Khan along with members of his security team saddled their electric bikes on their commute from Tooting to City Hall. The London Mayor and...
Read more
U.K.

How to Thwart Facial Recognition and Other Surveillance

Tom Simonite Mask Up, Be Safe Facial-recognition tech can see around hoodies or big shades, so pair them with a face covering. Plus, you'll get protection...
Read more