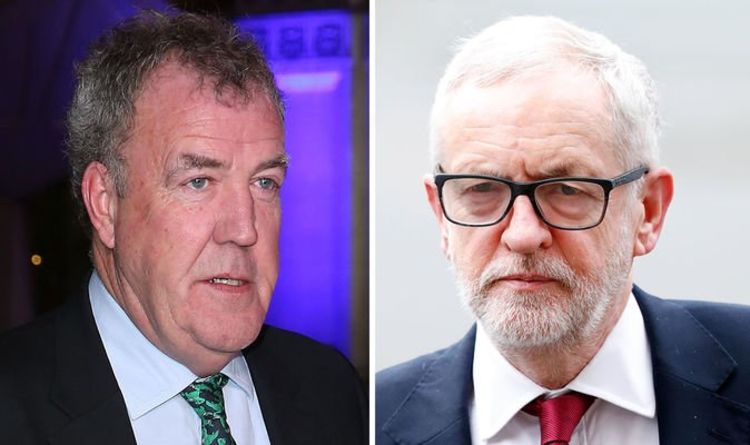 This included Mr Clarkson’s swiping remarks during the 2019 general election campaigning, when he derided the then Labour Party leader because he “can’t shave”. In an interview with the Independent, the former Top Gear star said: “I mean, Corbyn’s glasses didn’t fit. You can’t vote for a man who can’t shave and can’t even buy a pair of glasses that he can get straight on his nose. “I could run the country. No, I’ll just vote for ABC.”

When asked what ‘ABC’ meant, he replied: “Anyone But Corbyn. No one specifically, I don’t give a s***.”

As Mr Corbyn steps away from the leadership nearly four monts after election defeat, Mr Clarkson predicted such a departure all the way back in 2016.

On whether his new show would succeed, Mr Clarkson said he wasn’t “in a situation like Jeremy Corbyn”.

The Grand Tour host told the Press Association: “I’m in a different place to, say, Jeremy Corbyn. Jeremy Corbyn’s bar is here and mine is here, or actually the other way around.

“So he’s going to fail in his job, we will see where my line takes me.

“There is nobody alive today who hasn’t left a party thinking, ‘Oh god, why did I say that?’. Everybody, we all have. Everybody goes, ‘Oh no, I said somebody’s frock was terrible or their baby was ugly’, or whatever that might be.

“We all do that all through our lives, we all make mistakes and luckily, if you say it to just one person it’s not so bad, but when we do it, particularly me, it tends to be in front of millions, and you just go, ‘Oh no, I’ve said that out loud’, but you’ve broken your own guidelines, that’s all that has happened.”