Labour politician and miracle mum of quads, 39, dies of... 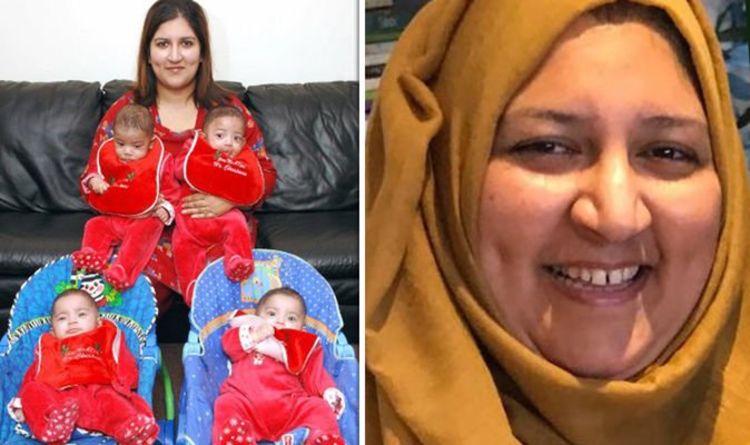 Mrs Sadiq, who was friends with Jeremy Corbyn, managed to juggle bringing up her 13-year-old quads and 19-year-old daughter with her work in education and children’s services as a leading councillor at Slough Borough Council. The cruelty of her COVID-19 death has been deepened further as the grieving family members have been forced to refuse comforting hugs because of strict social distancing rules and are confined to their homes.

Those paying tribute to Mrs Sadiq – and there have been many – have been forced to talk on whatsapp and video calls.

Her sister Anjim Iqbal said: “She was truly amazing and touched the lives of so many people. Only now are we really finding out just how much she did for people, especially orphan children, the homeless , and the less fortunate “

She added her brother Humeran Sheeraz, who had not seen Mrs Sadiq for a decade, flew from Australia’s Gold Coast to be by her side.

Mrs Iqbal said: “He could only stand outside her isolation unit with a glass door between him and Shabnum for 24 days. He had not seen ‘Shab’ for 10 years but flew from the Gold Coast to be by his baby sis. Relentlessly he ran to labs, phlebotomists to try and save his sisters life.”

She added Mrs Sadiq had complained of a slight dry cough just days before she flew to a family wedding in Pakistan in early March. Five days into the trip she was taken to hospital and coronavirus was confirmed. She beat the disease itself and was COVID-19 free but she died from damage wrought on her body during the battle.

Husband Khizwan Sadiq led the tributes to his wife and said: “I’m lost. I am so lost. I don’t know what’s going to happen to me.

Mrs Sadiq’s brother Kamran Sheraz, from Ilford, east London, said: “It’s so sad that I can’t go and say my goodbyes to her, just to be near her somehow. I won’t ever see her again.

“She was on a ventilator for nearly 24 days and every day we were getting results back with blood tests. Everything was working fine, so we were very hopeful and then all of a sudden on Monday, I got the phone call I think at about 2pm that she’d passed away.”

Colleagues at Slough Council were shell-shocked and the depth and number of tributes showed just how loved Mrs Sadiq was not just as a councillor but as a friend.

Flags were flown at half mast as a mark of respect.

Leader of the council James Swindlehurst said: “This is very shocking for all of us and our thoughts are with her family and friends. We worked together closely and personally I will miss her very deeply.

“This is a significant loss for the council and the town but is nothing compared to the loss her family, close friends and community are feeling right now.

“This has brought home to us that not only is this virus something we have to deal with as a town but also personally; through our work, through our actions and through our grief for those it has taken.”

Fellow Labour representative Cllr Haqeeq Dar added: “Councillor Sadiq was always up for it with a smile. She made your day by just being there which made a difference to a lot of people’s lives.”

In June 2006 Mrs Sadiq made headlines when she gave birth to quadruplets naturally – beating odds of almost a million to one. She had been given a diagnosis of polycystic ovary syndrome and had feared that she would not be able to have more children. But she managed to juggle a busy family life with her council work.

Her sister Anjim said: “We really can’t take it in. We were sat around the dinner table she jested about if she passed away how we would wail in her memory “ She actually surprised her husband on his birthday on the 5 th March and flew out to pakistan to an untimely demise.

Mr Sadiq added his wife’s death had brought home just how serious the coronavirus threat is and that everyone needed to observe the Government’s orders.

He said: “To be honest with you, it’s really dangerous. People should care about themselves, we were the unlucky ones in this. People have to be very careful – it’s not a joke.”

Officers at Slough Council have set up an official memories page for Mrs Sadiq.

And friends, family and all members of the public are being encouraged to light a candle in her honour and place it in the front window of their homes as a tribute and mark of respect to Mrs Sadiq and all those who have lost their lives to COVID-19.