Le cheek! EU wants Britain to pay ANOTHER £1BILLION because our economy is booming! 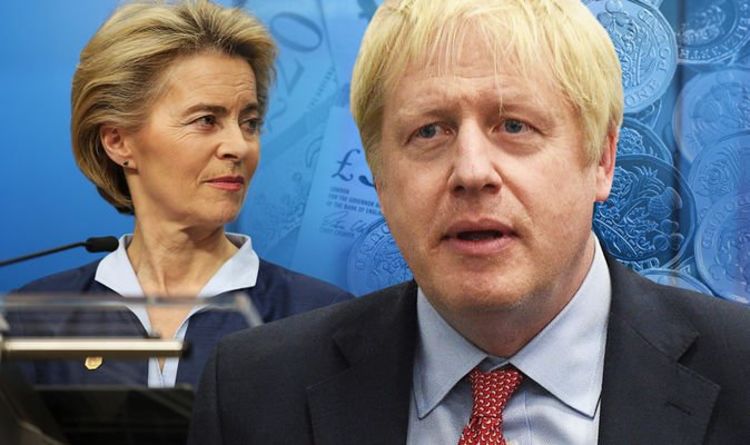 Boris Johnson was issued with the colossal bill from the European Commission last night as Britain celebrated finally leaving the EU. Brussels claimed the UK owes a further £1.09billion because of its increase in Gross National Income and VAT contributions, according to the Daily Telegraph. News of the latest bill sparked outrage, fuelling arguments Britain is effectively being punished for the strength of its economy.

It added more weight to Brexiteers’ argument that Britain is right to leave the EU, with one source claiming it was time the UK was in control of its “own money”.

Every year the EU recalculates contributions from its member states based on its Gross National Income and the size of the VAT base.

Britain paid Brussels almost £9billion in contributions to the EU’s budget for 2019-20.

Now with the boost of the UK’s economy, Britain could have pay up to £10billion for what could be one of the last instalments to the EU.

However, there is a chance Britain could get a rebate on this payments.

The amount for the rebate is revised according to EU economic data and sources claim the £1.09billion fee may be slashed in half once revisions take effect.

In 2018, the budget rebate was worth about £4billion, cutting the £13billion final bill down to £9billion.

A UK Government source said: “This bill will come down in negotiations. But the point is that we need to be in control of our own money. That’s why we’re leaving.”

JUST IN: We’ll be a truly United Kingdom, vows Boris as the UK leaves the EU

He told The Times: “It is in our common interest to define as close and deep a partnership as possible in defence and security, and in police, judicial, environmental, scientific and cultural co-operation.

“At the same time let me be honest, as I have always been: ease of access to the European market will depend on the degree to which the European Union’s rules are accepted, because we cannot allow any harmful competition to develop between us.”

European Commission president Ursula von der Leyen said: “We open another chapter. It is a story of old friends and new beginnings.”

Despite her sentimentality, presidents of the EU’s institutions gave a stark warning to Britain at a joint Brexit Day conference.

Ms von der Leyen said: “Strength does not lie in splendid isolation, but in our unique Union.”

She claimed the EU was “way more stronger than any single country”.

- Advertisement -
- Advertisement -
Facebook
Twitter
Pinterest
WhatsApp
Linkedin
ReddIt
Email
Tumblr
VK
Previous articleTravel expert reveals how to get the best deals – including booking at this time of year
Next articleCoronation Street spoilers: Fans spot huge continuity blunder 'Where did that come from?'