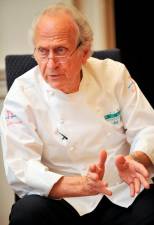 FRENCH Michel Roux, widely acknowledged as helping kickstart modern restaurant dining in Britain with “Le Gavroche” in London, has died at the age of 78, his scholarship fund said March 12.

“We are deeply saddened to have lost our founding father, Michel Roux OBE,“ said a statement from the Roux Scholarship, a competition set up by the chef and his brother Albert to identify new talent.

“Michel’s star will shine forever, lighting the way for a generation of chefs to follow,“ it added.

Roux, who had battled pulmonary fibrosis for some time, followed his brother to London in the 1960s where the pair opened the signature restaurant in 1967, at a time when Britain’s reputation for cuisine was in tatters.

The restaurant, along with “The Waterside Inn” that they opened in nearby Bray, Berkshire, were both awarded Michelin stars in 1974 and again in 1977, as fine dining slowly began to permeate British culture.

“The Waterside Inn” in 1985 became the first restaurant outside France to win three stars, and still retains its rating under the leadership of Michel’s son Alain.

The brothers were also at the forefront of the television cookery revolution in Britain, hosting a show in the early 1980s.

He founded the Roux Brothers Scholarship along with Albert in 1984. – AFP